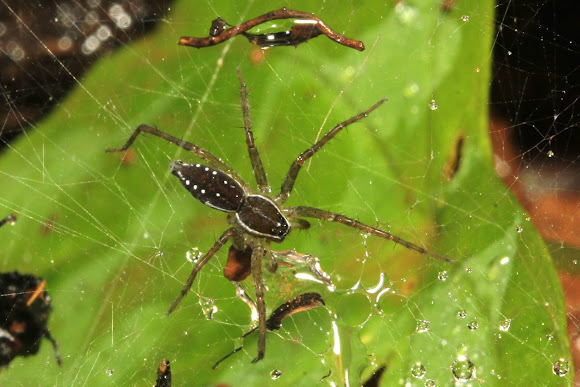 Dolomedes spiders are covered all over in short, velvety hairs which are unwettable (hydrophobic). This allows them to use surface tension to stand or run on the water, like pond skaters. They can also climb beneath the water, and then air becomes trapped in the body hairs and forms a thin film over the whole surface of the body and legs, giving them the appearance of fine polished silver.

Rather than hunting on land or by waiting in a web, these spiders hunt on the water surface itself, preying on mayflies, other aquatic insects, and even small fish. For fishing spiders, the water surface serves the same function as a web does for other spiders. They extend their legs onto the surface, feeling for vibrations given off by prey. Dolomedes species tend to be robust with thickset legs that allow them to tackle prey larger than themselves. They stretch out their front legs and wait, as if listening. Their front legs feel the vibrations carried on the water, just as other spiders feel the vibrations in a web. They are able to tell what is causing the vibrations that the water is carrying - to distinguish the drawn-out, erratic vibrations of a struggling insect from the one-off vibrations caused by falling leaves or the background noise of the wind or the flow of the water around rocks and other obstacles. As well as identifying the source of the vibrations, the spiders are also able to discern the distance and direction to the source. To this end they have a range of vibration-detecting organs, including very sensitive hairs (trichobothria) on their legs and feet. As soon as the vibrations reveal that there is a floundering insect within range, some fishing spiders may take direct action - they run at pace across the surface of the water and grab the insect before it extracts itself from the water and flies to safety. Some fishing spiders use silk draglines to prevent themselves from speeding past the prey.

Thanks a lot Mauna. I think I agree with your suggestion. They have an amazing way of hunting (as specified in the notes)

This looks like a fishing spider. Of course, I can't be so daring to suggest a species level ID for a spider found in India, but Dolomedes makes sense. To quote Wiki: "Many species have a striking pale stripe down each side of the body."

Ha! Trying to be an insect with only six legs. :-)