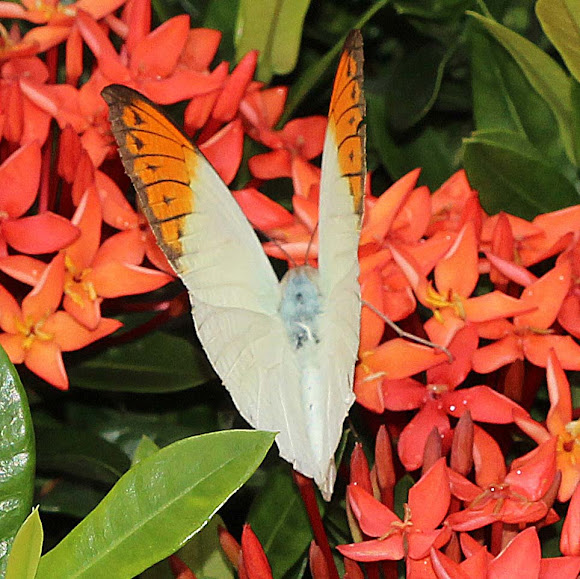 This Great Orange Tip was spotted at around 10:00 a.m. visiting the same Dwarf Santan (Ixora coccinea) in our front yard which it had visited the day before. This was the subject of my spotting no. 119170286. In that spotting, I made a suggestion that perhaps butterflies remember the plants they like best and the photos above show that the same butterfly visited the same hedgerow of Dwarf Santan in my front yard two days in succession. So the photos above can be compared with those of my previous spotting. The slight tears and nicks on the wing outer margins can be compared.

The reason I am so interested in this idea is that I have often noticed butterflies returning to certain plants on successive days, but although the idea occurred to me from time to time, I never grasped an opportunity to take pictures of this behaviour. I guess I was probably thinking "Oh, I've got some photos of that species already" and moved on. But this time, for some reason I took some pictures of the same butterfly on two successive days without realising it until I was sorting out the photos later. This may well be entirely irrelevant, but who knows. If someone who studies butterflies professionally has had such thoughts, this might be a little bit of evidence to add to his own observations.