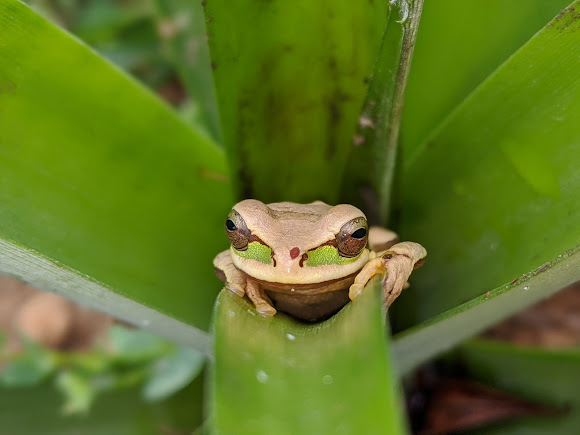 Smilisca phaeota is a relatively large hylid frog with adult size reaching up to 78 mm (Leenders 2001). This frog can be easily be distinguished, since it is the only large tree frog in Costa Rica that has both a silvery white stripe on the upper lip and a dark, masklike stripe from the nostril to the insertion of the arms (Guyer 2005). Many individuals have a green spot on each side of the head between the dark mask and the lip (Leenders 2001). Coloration can range from pale green to tan, and the frog may either be uniform in color or have dark olive green to dark brown dorsal blotches (Savage 2002). It has a relatively flattened body (Leenders 2001), and a smooth dorsal surface (Savage 2002). The head is as wide as it is long, with a snout that is bluntly rounded from above (Savage 2002). It has skinlike webbing between the toes and fingers and an enlarged disk on each finger that is adhesive. The eardrums (tympana) are visible. The eyes are large, with horizontal elliptical pupils and copper colored irises (Leenders 2001).

I found this frog inside a bromeliad plant near a stream at 1100 MASL.

Smilisca phaeota is capable of changing color. It can change the color of its upper surface to tan or green. They are usually tan during the day and change to green during the night (Leenders 2001). These frogs are mainly active during the night and throughout the wet season (Savage 2002). During the day, they sleep on the upper surface of large leaves, but have also been found sleeping on top of large tree ferns or in rolled-up banana leaves. In the mating season, males produce a loud and harsh "wrauk" at dusk.

Incredible photos, what a lovely spotting!