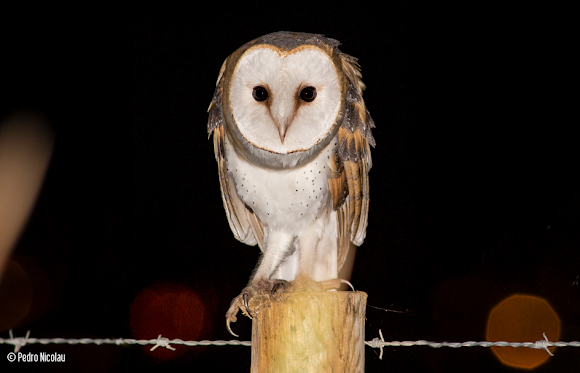 A rather familiar bird to most farmers, the Barn Owl is probably the most widely distributed night hunter. However, its populations have considerably decreased in recent years in several countries, something you could not tell if you visited Lezíria da Ponta da Erva on a Summer night. This place, where these owls were spotted, is one of the 2 places on Earth which holds the highest Barn Owl density! Nonetheless, they are always fantastic birds to watch and definitely deserve their place on PN.

amazing face. Never would i have been able to see it--if it was not for you.

Fun fact! The barn owl’s hearing is the most sensitive of any creature tested, enabling it to hear the slightest sounds made by its rodent prey while flying up to three meters overhead.

I get you Landmark, they really are hehe.
Once again, thanks everyone.

those things are SO cute but really intimidating at the same time. i don't really get it. :)

Thanks everyone for the nice comments!

i don't know how i missed this wonderful spotting!

Thank you Jakubko and Debbie!
Yes Debbie, I love Little Owls as well. They are extremely loud though!

Beautiful series and spotting Pedro, these and little Owls are my favourite (of the owls that is) :-)

Well thank you, Marta! Yes, there's not a best place to see them really close. And there are so many.. This night I spotted over 50. And I'm going back there on Thursday trying to see one eating a wood mouse... Hehehe maybe I'm just too ambitious.

and nice that you have pointed us to a good place to spot them, thanks!

Nice spotting! We have owls in the neighborhood but we just hear them or see them in the distance. They live in the church near our house :-)