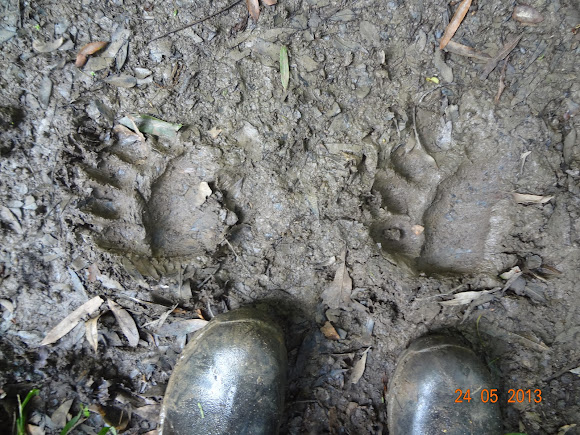 Louisiana black bears are a threatened subspecies of the American black bear. LA black bears have been increasing in numbers with the assistance of conservation efforts, and can be observed in several parts of LA. Although called "black" they can be lighter, almost brown (giving them the colloquial name "cinnamon bear"). Males can be 400 lbs or more, although female bears tend to be smaller. The state of LA is making an effort to educate hunters about the difference between bears and feral hogs, as sometimes bears are mistakenly shot. It is ILLEGAL to kill LA black bears! Bears have small, rounded ears (not floppy ears), and a small furry tail (not a long pig tail). Bears will tend to be larger than hogs and body shape will be much different, however bear cubs are small too. Be sure that you know what it is you're shooting at! (That's just common sense.)

LA black bears prefer large, remote tracks of forest with sufficient denning sites and plenty of forage. This usually means bottomland hardwood forest, as large hollow trees (den sites) tend to be more available in the hardwoods. Although territories tend to be centered around forests, bears will explore and travel through non-forested areas, including farmland. Bears are known to take advantage of planted crops as a readily available high-carbohydrate food source.

These tracks were observed at Bayou Cocodrie NWR, a very cool place with some of the oldest hardwood trees left in LA (one unit hasn't been logged since the 1800's). We noticed plenty of large, hollow trees for den sites, and plenty of blackberry/dewberry bushes for food. Although we saw lots of tracks, we actually didn't see the bears themselves very often. They are very good at hiding in the dense palmetto undergrowth, and are very quiet when they move through the forest. For common sense, it's always safest to hike with a buddy, not just in bear country.