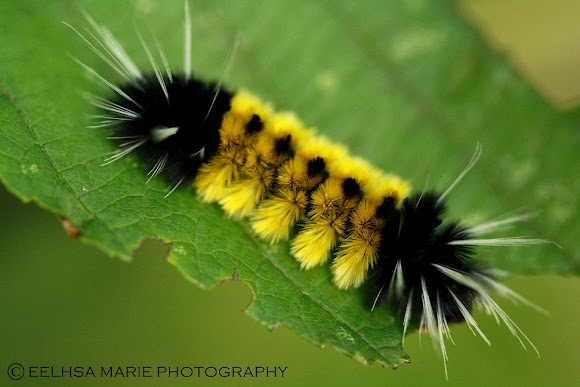 A pretty black and yellow caterpillar with a row of black spots on its back and long white tufts at each end. (Depending on the region the black spots may not be present)

Found in southern Canada, western United States - South to Kentucky & South Carolina. The caterpillar eats primarily leaves of poplar and willow, but will also eat those of alder, oak, birch and maple.

In the last few days I have seen between 10-15 of these little caterpillars' it must be a good year for them. For the most part I have found them on Alder trees, but I did also spot one on a Birch tree. The caterpillars were happy just to alternate between eating and resting and they didn't move around too much.

Hi Juan,
I tried to remove this sighting and a couple others once I realized my mistake. However, it seems you are unable to remove a sighting from a group once you've put it in. If you can, I would appreciate it if you would tell me how to go about that. I apologize for the error.

Hi eelhsamarie. Thanks for participating in Pollinating Insects mission. Please notice this mission is only for insects actually visiting flowers. Besides, caterpillar are not considered pollinators, in fact, they frequently are detrimental to pollination, since they feed on flower structures. For more information please read the mission instructions.