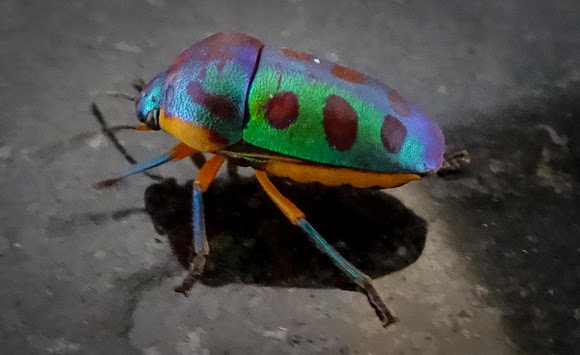 About 15mm sized Shield Bug. In the photos there are three different individuals, and the second and third photo shows a male and a female (mating and just after mating). The video is filmed just after mating.

I have found notes on observations of this Shield Bug from different pards of Africa and India. It can cause a lot of damage to crops, and are considered a pest. It is known to be difficult to kill with insecticide and it feeds and breeds on a wide variety of plants including poisonous ones like Jatropha and Castor. It has been reported on sorghum, maize, rice, okra, sunflower, Noog Abyssinia (Guizotia abyssinica), Star Burr Acanthospermum hispidum, Jatropha podagrica, Jatropha curcas and cotton. In the past cotton cultivation was abandoned in parts of Tanzania due to the Rainbow Shield Bug. Since The Rainbow Shield Bug suck the sap from developing seeds leading to seeds dropping prematurely or not developing fully, it is important that famers to "time" the sowing so that the fruiting body is fully developed when the dry season hits, and the bugs find it more difficult to find food. A study from Ghana (Kaufmann 1966) found that the population was mainly self controlled. Nymphs eat eggs, thus a higher density of nymphs reduces the number of eggs for the next generation. Natural enemies are not mentioned as a controlling factor. (a lot of the information above is received from a PDF-file named "2010-01 Alert Rainbow Shield Bug", it can be found here: http://pythonkit.com/Assassin-Bugs-Fact-...)

Thank you for your dear comments Gisele and Sarah :)

sarah in the woods 8 years ago

The first picture captures the colors so beautifully. Well done!

Rick, Malcolm, Adarsha! Thank you for your comments, you guys are great!

Thank you very much for your words Surekha and Carol :) I really appreciate it!

Thank you Ma Nature :) I will keep on looking for them in order to find differencies myself, it is not only the light... The male and the female had different coloration, as well as the specimen on the first photo...

Thank you so much Gilma, Matildaclarice and Larry for your dear comments!

Have a great day all!

Really lovely Tiz. Must be amazing to see lots together because they all seem to reflect light differently. I love the 5th picture! Too bad they are such a pest. Good job on the info!

That bug is the most prettiest bug I have ever seen!

I understand now. But you should not skimp on smiling, laughter. :D

You're talking lacewings eggs? Calm down, you will find them. You should widen your eyes to the leaves and twigs. He? Eu não sou he, sou she. :D

He, Sckel, thank you (I think) :D Just "pop" over here and well go bug hunting together! You always find the eggs of things, and take great pictures of them to! I have never seen a photigenic insect egg in my life! I think we would make a good team :P

Yasser, thank you for commenting. Glad you liked the video. I wanted to show that the second set of wings folded under the top wings are a bit transparent, and that was tricky without going in slow motion.

Miss, that little jewels bright you found. Wonderful. I'm happy for you ... Actually, I'm jealous. I also want to finddddddddddddd.

Dotun55, not even the feces stank from this bug! :) Very much like all the human ladies in this world! :D

Depends on the lens and how much your hands shake but at least for me it was easier when I used a gun than the macro lens :).

I am used to guns, so how hard can a macro lens be, huh? haha! I have a few days back home to practice!!! Hopefully something will get sharp enough to allow me to upload it here :)