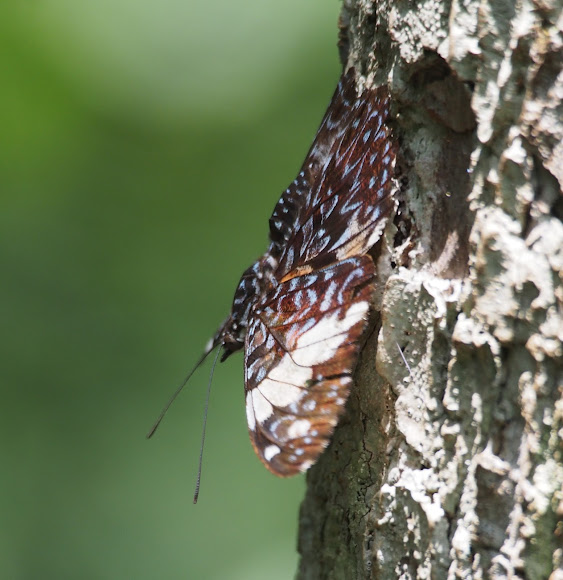 Cracker butterflies are a neotropical group of medium-sized brush-footed butterfly species of the genus Hamadryas. The butterflies are commonly known as Crackers due to the ability of the males of several species to produce a sound similar to the crackling of bacon in a frying pan. The sound is produced as the butterflies take off, and is made by twanging a pair of spiny rods at the tip of the abdomen against bristles on the anal claspers. Only males can produce the sound, but both sexes can detect it - their wings have tiny hollow cells covered in membranes that vibrate in response to sound, and stimulate nerve endings. The purpose of the sound is not known. It may possibly deter competing males from occupying the same territory, or could act as a trigger to initiate the first response from a female during courtship. Both sexes spend most of their time basking high up on tree trunks, often 10 metres or more above the ground. They sit there for hours with wings outspread, always facing downwards to keep a watchful eye for potential mates. The common name Red Cracker refers to the colour of the underside hindwings, as seen in a very poor shot in the last photo.