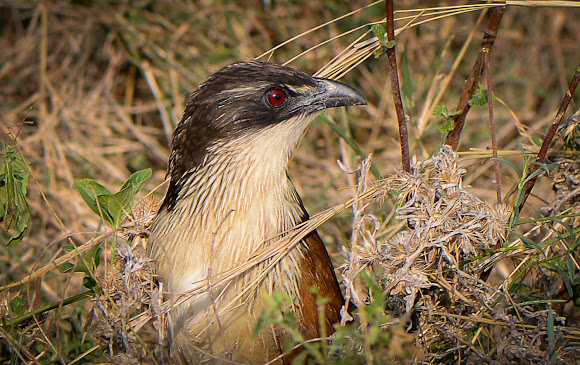 This species' distinctive call, which resembles water pouring from a bottle, is said to signal impending rainfall, earning the bird the name "Rainbird." This Coucal measures about 16" or 410mm in length and has a striking plumage, with a broad, yellowish-white supercilliary stripe, which is a unique feature amongst other coucals within its range. Its habit of skulking in shubbery, undergrowth and dense waterside vegetation makes it difficult to spot.

Next to the road, poking in the grass shrubs for food.

This taxon is considered a subspecies of Centropus (superciliosus or burchellii) by some authors. The White-browed Coucal (Centropus superciliosus) is a species of cuckoo in the Cuculidae family. It is found in sub-Saharan Africa. It inhabits areas with thick cover afforded by rank undergrowth and scrub, including in suitable coastal regions. The southern subspecies is sometimes split as Burchell's Coucal, Centropus burchelli. According to popular Southern African lore, this species' distinctive call, which resembles water pouring from a bottle, is said to signal impending rainfall, earning the bird the affectionate moniker Rainbird. Diet / Feeding: They mostly feed on insects, but it will also take young birds and eggs. Breeding / Nesting: The Burchell's Coucal is non-parasitic (they raise their own young). The males construct a nest, they then incubate the eggs and provide most of the feeding and care for the young.

Thank you Jared :)! I wish that I could say that I am familiar with the call as well, but at least, after watching this on youtube (http://www.youtube.com/watch?v=0D22EwszP...) I will be able to recognize it in the future! It is really special!

Thank you Kerry darling and Sachin for your nice comments. I really appreciate it a lot :))