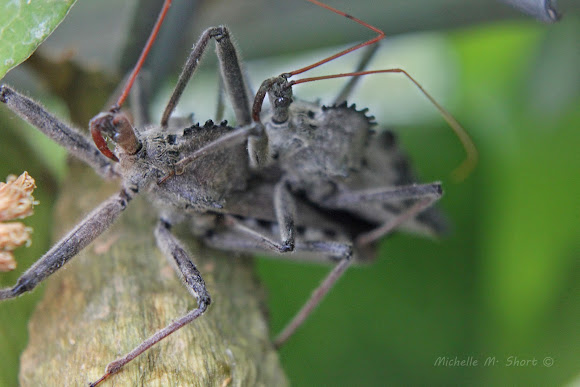 This insect is easily identified by the coglike “wheel” on its back. Like most true bugs, it has membranous wings that fold flat along the back when at rest (creating an X pattern on the back), and mouthparts joined into a strawlike structure used for piercing and sucking. As with other members of the assassin bug family, the wheel bug has a clawlike beak with 3 segments that can fold into a groove beneath the insect’s body. The first segment on the first pair of legs is somewhat thickened, and the sides of the abdomen extend beyond wings. The head is very narrow, the antennae jointed. Adult wheel bugs are usually gray or brownish; the immature nymphs are red with black legs, and can look rather spiderlike. Length: to 1½ inches (North America’s largest assassin bug) Life cycle: There is only one brood per year. Adults mate in autumn, and the females lay six-sided clusters of cylindrical brown eggs on solid objects such as trees. Hatchlings emerge in spring and grow slowly, taking months to mature. As they grow, the nymphs molt and pass through various immature stages. Around midsummer, they emerge from their final molt as winged, sexually mature adults. Only the adults possess the crest or wheel-like structure on the back. Ecosystem connections: Assassin bugs are much like spiders and praying mantises: They are top predators in the world of insects. But in the world of vertebrates (birds, mammals, reptiles, and large amphibians and fish), they are prey, and their jagged body armor is one way they avoid being eaten.

Habitat and conservation: Wheel bugs fly noisily and clumsily. They prowl around flowers, gardens, trees, and grassy areas, hunting other insects. Most people consider them beneficial, as they help control many insect pests, including caterpillars. Handling wheel bugs is not recommended, as they can inflict a very painful bite. They sometimes land on people but can be brushed off easily, if they do not soon fly away on their own. Crushing or slapping at them generally causes them to bite. Foods: Like many other true bugs (such as cicadas, aphids, stink bugs, and leafhoppers), wheel bugs have strawlike mouthparts adapted for sucking nutrients—in this case, it’s the juices of other insects. Much like a single-fanged spider, a wheel bug bites its prey, delivering a subduing venom that causes the prey insect’s tissues to liquify. The “meat” of the insect can then be sucked up through the wheel bug’s strawlike beak. Distribution in Missouri: Statewide.

On 9/15/2013 I found 3 wheel assassin bugs in my back yard among the flowering vines I have growing in the fence. The first one was all by itself and at the opposite end of the yard I found these 2 wheel bugs getting ready to mate, I was so happy to see such a sight. http://missouriconservation.com/

I have a wheel bug that is currently laying her 2nd batch of eggs this season. I brought her in about a month ago and she laid her first batch then.

Hi. About common assassin bugs,do you how many batches of eggs can a female assassin bug lay?