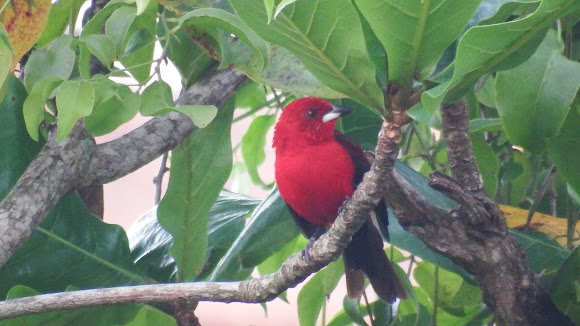 The Brazilian tanager is a typical member of the family, with a heavy bill and sexually dimorphic plumage. It is 18 cm (7.1 in) long and weighs 28–35.5 g (0.99–1.25 oz). The plumage of the male is bright red with black wings and a black tail. The bill is black above and pale below. The female is mostly grey-brown with a brown-red belly and breast (Wikipedia)

A frugivorous bird, it is easily found in its natural biome wherever there is food enough available, tending to behave aggressively towards other species of birds when disputing for food. Its habitats include shrubby areas that are not forested, including coastal scrub, forest clearing and edge, swamps, gardens, and city parks. The species has declined in some areas due to trapping for the caged bird trade, but it is tolerant of disturbed habitats and is not considered to be threatened with extinction (Wikipedia)

Great shots and video of a beautiful bird David. Thanks for sharing.