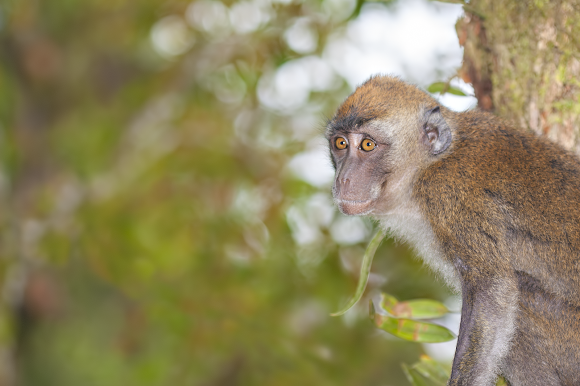 The crab-eating macaque (Macaca fascicularis), also known as the long-tailed macaque, is a cercopithecine primate native to Southeast Asia. It is referred to as the cynomolgus monkey in laboratories. It has a long history alongside humans; they have been alternately seen as agricultural pests, sacred animals in some temples, and more recently, the subject of medical experiments. The crab-eating macaque lives in matrilineal social groups with a female dominance hierarchy, and male members leave the group when they reach puberty. They are opportunistic omnivores and have been documented using tools to obtain food in Thailand and Myanmar. The crab-eating macaque is a known invasive species and a threat to biodiversity in several locations including Hong Kong and western New Guinea. The significant overlap in macaque and human living space has resulted in greater habitat loss, synanthropic living, and inter- and intra-species conflicts over resources.

spotted along the trail of Mt. Daguldol

I'm not really sure if it's in captivity or not despite the absence of chains or shackles around, but this guy is not shy at all.

thank you so much dame DanielePralong :)