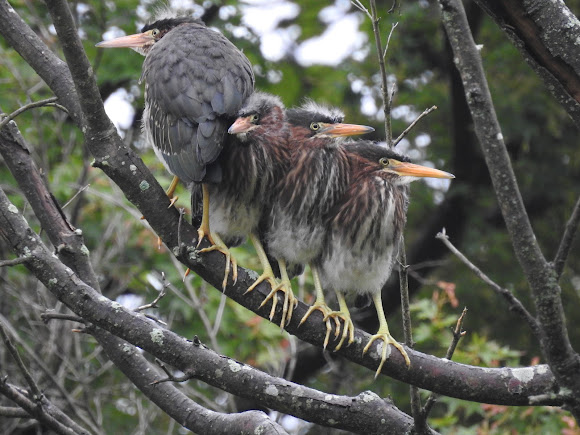 Short, stocky and compact as compared to other herons.

Freshwater ponds, streams with dense trees at the water's edge.

This photo was taken on a dreary morning about an hour after sunrise. One by one, these young green herons side-stepped up the tree to make their place with the adult. Until I discovered this neighborhood park (Lakeside Park), I typically only saw Green Herons one at a time. Also, this park appeared to be missed by other birders as there were no entries for it in ebird. I first stopped there this spring to watch a pair of Yellow Crowned Night Herons make their nest in the rain. On subsequent visits throughout the spring and summer, I discovered it was a green heron rookery! Green Herons nested there throughout the summer. Their hatchouts were not concurrent, because just when I thought they were done, I discovered a new nest with hatchlings. By season's end, another birder and I had found 64 species in that little neighborhood gem of a park! More than half of the species were found to be raising young there. Their data contributed to Virginia's Breeding Bird Atlas.