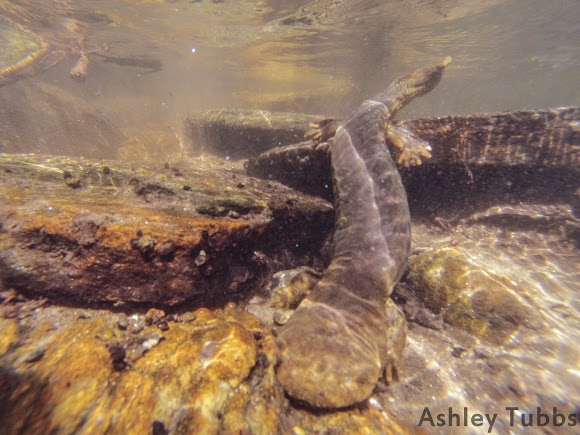 Lifer, and one that meant a lot to me! This is the largest salamander in North America, and the 3rd largest in the world. I found 2 individuals this day, the first being about 16 inches long and the second at 22 inches. They are a fully aquatic salamander and have a flattened body that allows them to fit easily under rocks and logs in the water. They have baggy skin around the mid-section of the body to increase surface area for respiration. Their eyes are reduced as they don't use them very much, they have a lateral line (similar to fishes) that allows them to feel changes in the water.

Only found in NC in the western part of the state, they inhabit cold water streams and rivers. I found these two in a high elevation river with water somewhere in the 50F range. The first one was seen crawling out of the water onto a log (which is really weird for this species, they don't normally crawl out of the water). The second one I found by looking along the edges of rocks and logs in the water, he was just walking on the bottom of the river next to a very large rock. They are supposed to be nocturnal, but I hear a lot of people say they find them active during the day. The pin was just placed in a random location in western NC. Not only was I not driving and really had no idea where we were besides "somewhere in the mountains", this is a species of special concern and its location should be protected.

This species is rapidly declining throughout its range. To make matters worse, all evaluations of populations are finding that greater than 90% of individuals are greater than 20 years old, meaning they are having very little or no recruitment. Many are afraid this species is doomed in the wild, and it will be a sad day when the last one is gone.

Such an awesome spotting, Ash! What an amazing species. I hope I get to find one in the wild.

Thanks Antonio!
Rosa, they get somewhere around 30 years old in the wild. There are several reasons for their decline. A major one is dams. Not only do dams prevent dispersal routes for young males, they create deep water lakes that are unsuitable habitat for these guys. Another big reason is siltation, mostly from agriculture practices, that fills in riffles which are critical habitat for the larvae. And of course pollution is a major factor, as it is for any wild organism. It's such a shame these guys are declining so rapidly, definitely one of the coolest critters I have ever seen!

Hey Ashley how old do Eastern Hellbenders get? Also do you know what the major cause is to the species being in danger? Thanks for sharing!