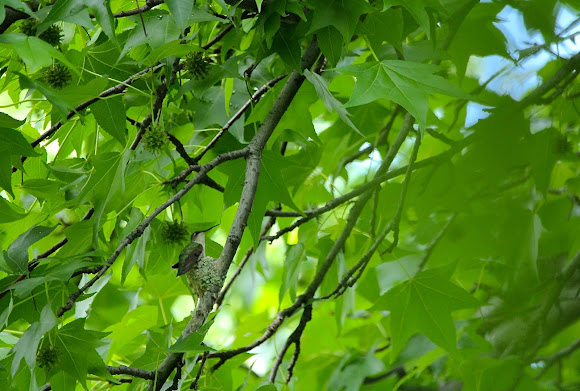 A few weeks ago, the first-ever recorded hummingbird nest in Central Park was established by a Ruby-throated hummingbird. While there might have been nests before on the interior, or even out in plain sight, earlier birders concentrated on migratory species and often ignored resident ones. I was very excited to see this nest for the above-stated reasons; also, this was the first time I saw a hummingbird outside a museum before, so it was a lifer for me! However, some 25 minutes before the bird-watching group I went with arrived at the nest, a Baltimore Oriole came and ate both the eggs within the nest, dooming it. Likely all males within the park had moved on to other places so re-establishment was not an option. The female hummingbird continued to return and check on the nest for a few days after, but has by now abandoned it-- the first-ever recorded hummingbird nest in Central Park. A brutal reminder that nature is, essentially, and quite literally, a 'bird-eat-bird' world.