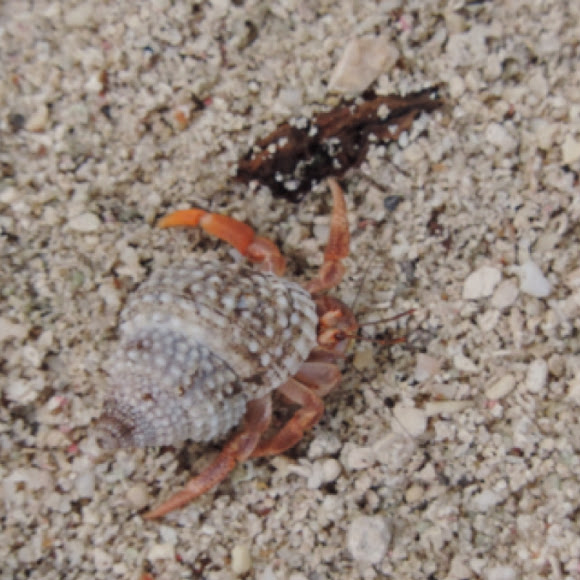 Hermit Crab, a land- or water-dwelling crustacean. Unlike true crabs, hermit crabs have soft, vulnerable abdomens. For protection from predators, many hermit crabs seek out abandoned shells, usually snail shells. When a hermit crab finds one of the proper size, it pulls itself inside, leaving several legs and its head outside the shell. (A hermit crab has five pairs of legs, but not all of them are fully developed.) A hermit crab carries the shell wherever it goes. When it outgrows its shell, it switches to a larger one. Most adult hermit crabs are from 1/2 inch (13 mm) to 4 3/4 inches (121 mm) long. Living on the seashore, in tidepools, and on the sea bottom in deeper water, hermit crabs scavenge their food.

Small cay off coast of Belize.

A hermit crab has two pairs of antennae and round eyes on the ends of eyestalks. Hermit crabs have 10 legs, but only 6 legs show. These front 6 legs are known as walking legs. Hermit crabs keep their 4 back legs inside their shell. The back legs are much smaller than the walking legs. The front pair of legs ends in claws, or pinchers. The left front leg has a large pincher, which the crab uses for moving around and defending itself. When the animal is hiding inside its shell, it uses this pincher to seal off the shell’s opening. The right front leg has a smaller pincher, which the crab uses to eat and drink. Both front pinchers have thick layers of exoskeleton.