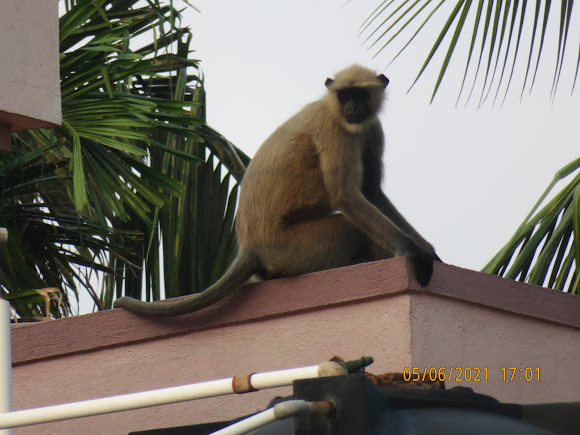 The long tailed monkey is gray with a black face. Hands are black too.

I spotted it on my neighbour's roof where a crow tried to mob it alone but failed to attract others to join the attack. The langur simply waved it away. It then broke off the top of the overhead water tank but failed to drink as the water level was low. Then it shook the pole with the security camera and tried to break off the dish antenna but got bored. It must have seen me replenishing the water bowls I put out for the birds and bounded over for a drink. I scooted the moment I saw it cross the road. Two women on bicycles who had stopped for a natter...fled! It ignored the banana put out for the birds and civet cat but plucked some leaves of the purple yam (Dioscorea alata) that is now sprouting from last year's leftover rootlet. Supper over; it left. The Hanuman langurs live in groups...this one was in a group with three members. I think the flooding post cyclone Yaas has sent them into urban areas...these langurs are never persecuted, so that is a good thing.

Never had a better Environment Day.

Hi Neil, I love these encounters too but my neighbour was most miffed. It had torn and thrown away the cover of the water tank on the roof and they needed to drain and clean it because it had tried to drink from it!
These are not persecuted because of their role as described in the epic Ramayan....I am grateful for whatever helps save animals.

Excellent spotting, Sukanya. I love these wildlife encounters. Thanks for your wonderful story, and I'm so happy to hear these animal are not persecuted :)