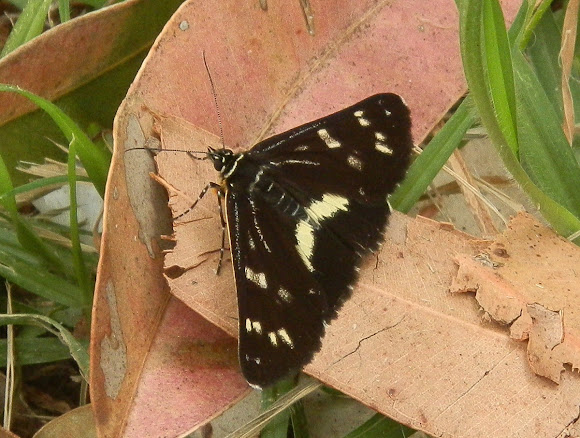 An attractive black moth with small cream flecks on the fore wings and larger cream bars on the hind wings. Each fore wing also showed narrow pale lines one extending along the costa from thorax to middle of wing and the other, from the wing base to the middle of the wing. Antennae were thin and of moderate length, looking like those of a butterfly. Wing span was about 50 mm.

Spotted in a nature reserve - Balmoral, Sydney.
This species is seen along wetter coastal regions of South Queensland and New South Wales.

The thin white line from wing base to middle of fore wing is one of the features that distinguishes this species from C. donowani.
When resting on vertical surfaces this species is said to rest head down as can be seen in Pic 2.
Larvae feed on Alocasia species (Araceae).
Family: Agaristinae

Good job spotting that Leuba. I appreciate your notes too. Thanks.