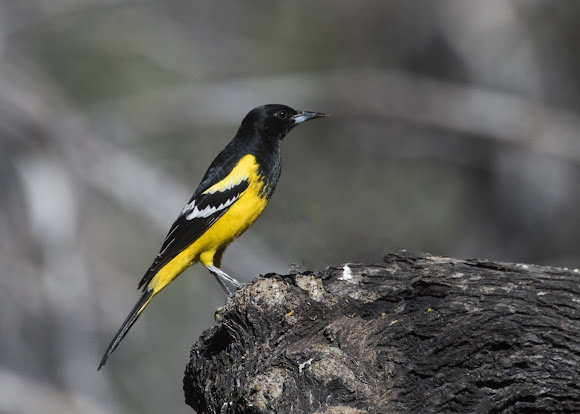 A striking bird in color, with black head and upper wings. Black extends into the upper breast, with bright yellow lower…as pictured. The female (2nd photo above) has a brownish-yellow head, pale yellow breast and pale black wings…also pictured.

This mating pair was spotted in Ash Canyon in the Huachuca Mountains in southern Arizona. The area is rugged terrain with wooded areas (sycamore, ash, walnut, and willow), interspersed with cactus and yucca plants in a transition zone between desert/grassland and alpine areas.

The Scott’s Oriole is greatly dependent on yucca plants for access to insects which live on and in the plant, as well as for nectar in the yucca blooms. It constructs its nest in yucca spikes using dried up spikes as material. According to on-line sources, this bird migrates north from Mexico south as far as the Baja. The area where these birds were spotted is close to the US/Mexico border, with the Huachuca Mountains extending into Mexico.

Paul Davis a year ago