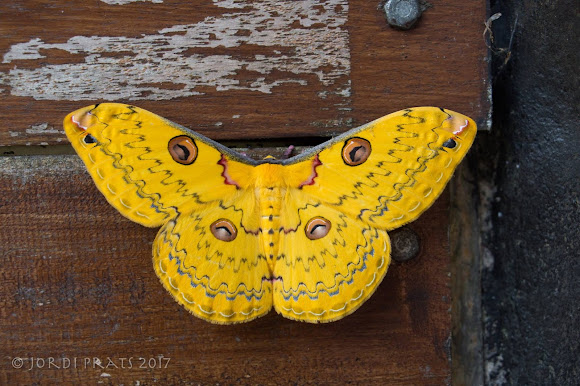 Male moth, wingspan about 95mm and its body 30mm long, yellow wings with subtle parallel wavy grey markings and prominent eyespots on each wing, brown leading edge on angular forewings, yellow abdomen with dark spots. The female is larger than male, male is recognized by bushy, feathered antennae and angular forewings. Adult moths have primitive mouthparts and do not feed.

Spotted during a day walk at Gunung Gede National Park, Java / Indonesia. It is found across South & Southeast Asia.

Loepa katinka, the golden emperor moth, is a species of moth belonging to the Loepa genus found in the Saturniidae family. The caterpillars are a striking dark brown color with yellow triangles along each side and metallic blue protrusions along the dorsal surface. They feed on vines until they are ready to spin their wild silk cocoons. Cultivating silk moths for fabric production has a long history starting in 2700 B.C. with the Chinese. They kept their secret until 300 AD, when their techniques spread to Korea and Japan. This moth used for silk production eats Mulberry leaves and is named Bombyx mori. Kingdom: Animalia Phylum: Arthropoda Class: Insecta Order: Lepidoptera Family: Saturniidae Genus: Loepa Species: L.katinka

Thanks Mark it has been a nice welcome, just at the entrance signal of the National park