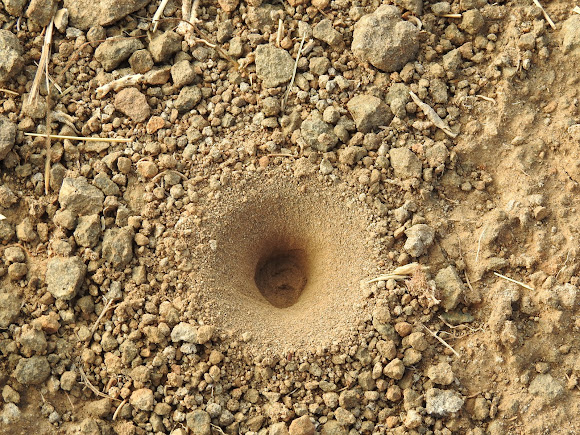 Crater-like pits made by the antlion larva in soft land. Each funnel-like crater is approximately 2 centimeters in diameter and almost as deep.

pits trap of an antlion larva found on the hills

n trap-building species, an average-sized larva digs a pit about 2 in (5 cm) deep and 3 in (7.5 cm) wide at the edge. Having marked out the chosen site by a circular groove, the antlion larva starts to crawl backwards, using its abdomen as a plough to shovel up the soil. By the aid of one front leg, it places consecutive heaps of loosened particles upon its head, then with a smart jerk throws each little pile clear of the scene of operations. Proceeding thus, it gradually works its way from the circumference towards the center. As it slowly moves round and round, the pit gradually gets deeper and deeper, until the slope angle reaches the critical angle of repose (that is, the steepest angle the sand can maintain, where it is on the verge of collapse from slight disturbance). When the pit is completed, the larva settles down at the bottom, buried in the soil with only the jaws projecting above the surface, often in a wide-opened position on either side of the very tip of the cone.The steep-sloped trap that guides prey into the larva's mouth while avoiding crater avalanches is one of the simples and most efficient traps in the animal kingdom. Since the sides of the pit consist of loose sand at its angle of repose, they afford an insecure foothold to any small insects that inadvertently venture over the edge, such as ants. Slipping to the bottom, the prey is immediately seized by the lurking antlion; if it attempts to scramble up the treacherous walls of the pit, it is speedily checked in its efforts and brought down by showers of loose sand which are thrown at it from below by the larva. By throwing up loose sand from the bottom of the pit, the larva also undermines the sides of the pit, causing them to collapse and bring the prey with them. Thus, it does not matter whether the larva actually strikes the prey with the sand showers.