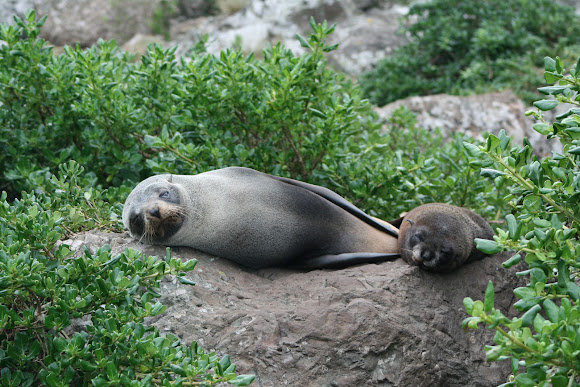 This is a grey-brown seal as an adult while pups are almost black. Males weigh on average about 125kg (but can be up to 250kg), females are only 30-50kg and up to 1.5m long. They have external ears and hind flippers which rotate forwards, distinguishing them from other seals. They have a long pointy nose and pale whiskers. Pups are born in colonies on land, left to fend for themselves while their mothers hunt daily for food. Whelping season is indicated to be between November and January but the Cape Palliser colony had pups which appeared to be no more than a month or two old. Their diet consists of fish, cephalopods (squid, octopus, etc) and birds.

They inhabit the rocky coastline around the lower North Island and South Islands of New Zealand. They need a safe haul out area for resting in between feeding and for whelping. Due to seal hunting in NZ in the 18th and 19th centuries, their numbers plummeted but are now recovering due to healthy fish stocks and un-developed coastlines. There is a healthy population of large predatory species around N (Great White Shark, Mako Shark, Orca Whales, etc) indicating a robust eco-system. They will haul out onto rocks, grass and beaches, and having no land predators are unafraid of humans. Pups left in creches will happily sleep or play in rock pools, unaccompanied by adults.

This collection of seals were photographed at the Cape Palliser colony, all at close range. Individuals varied from very young pups to mature females. Even the very young pups are aggressive if you accidentally get too close (with the amount of seals hauled up around every rock and piece of vegetation, this is easier than you would think!)

Great spotting. Their breath is as bad as their bite but the look so cute!

Superb. Thanks for sharing this.