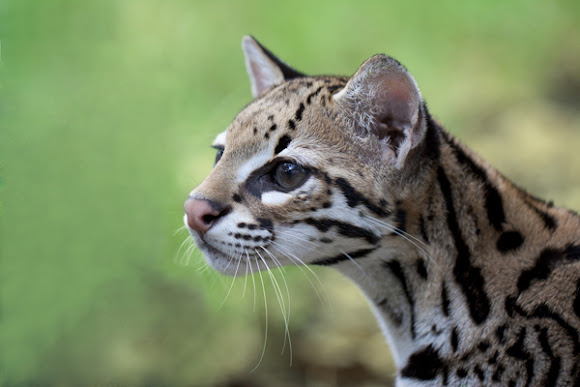 Is a small spotted felid found in the tropical rainforests of Central and South America. The Oncilla resembles the Margay and the Ocelot, but is smaller, with a slender build and narrower muzz. it is classified as vulnerable. The chief threats to these felines are deforestation and poaching. They are also killed for their pelts, which are highly prized and often sold or made into clothing. Also another factor contributing to Oncilla mortality is human expansion, settling what was once open terrain for wild cats. Coffee plantations are most often established in cloud forest habitats, causing the reduction of preferred habitats.

This oncilla was photographed at the Barranquilla zoo.

Awww look how cute he is :)

A big cat in a small package. Perfect. Beautiful photo and spotting, Carolina. Love the info too. I loathe the thought that they're killed for their pelts. Absolutely criminal!!!

What a magnificent shot you got there!

Wow, I've never heard of this animal before!!

Thid it atak you ? Anyway its amaizing!

Just seen this pic - what a handsome creature. Love the detail.

and 335 other people favorited this spotting