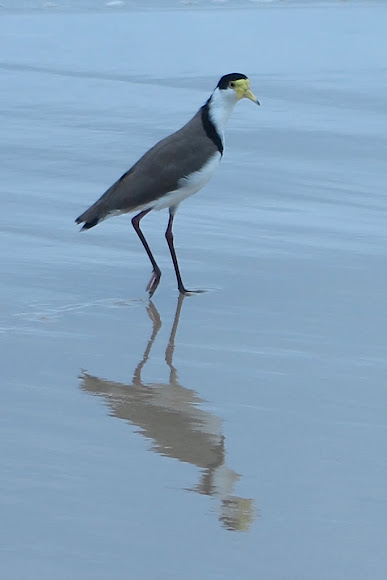 I know these birds as "plovers", and I see them regularly around the city, but this was the very first time I saw one at the beach. It was a pleasure to watch this bird dodging the incoming waves rather than traffic, as they have an unfortunate habit of feeding on the roads and nesting on grassy roundabouts, and it's always a hair-raising experience when plovers play chicken with motor vehicles! "The "masked lapwing" (Vanellus miles) is a large, common and conspicuous bird native to Australia, particularly the northern and eastern parts of the continent, New Zealand and New Guinea. It spends most of its time on the ground searching for food such as insects and worms, and has several distinctive calls. It is common in Australian fields and open land, and is known for its defensive swooping behaviour during the nesting season.... also known as the masked plover and often called the spur-winged plover or just plover in its native range, lapwings are classified to their own subfamily, Vanellinae, and not to the closely related plover subfamily, Charadriinae. There are two subspecies.... V. m. miles and V. m. novaehollandiae." (Wikipedia)

Here's a spotting I made some years ago of a plover family with chicks.... https://www.projectnoah.org/spottings/25...

I'd never seen one at the beach before.