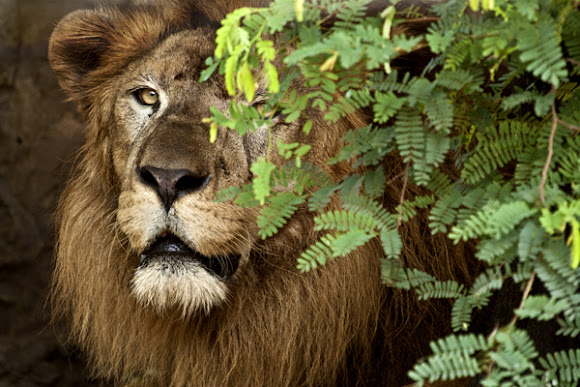 The lion is a vulnerable species, having seen a possibly irreversible population decline of thirty to fifty percent over the past two decades in its African range. Lion populations are untenable outside designated reserves and national parks. Although the cause of the decline is not fully understood, habitat loss and conflicts with humans are currently the greatest causes of concern. Lions are unusually social compared to other cats.

They typically inhabit savanna and grassland, although they may take to bush and forest.

They were both photographed at some Colombian zoo.

So true! When I visited the 6 flags in Vallejo last year . i went to their animal kingdom.They have a lion habitat. So I went up to it and closed my eyes at a lion. He closed his eyes back too! just like my cat Max!

It never fails to amuse me that the "big cats" mannerisms are so similar to their domesticated, much tinier, cousins -- house cats. :o)

I LOVE lions! I'm hoping to work with them when i get older. Also with tigers.
This photo is beautiful!

Lovely pictures, agree with above ;)

Thank you for such beautiful comment, your photos are incredible :)

Its not that I don't like the your first pictures (aux contraire), but the second one is always breathtaking, like in http://www.projectnoah.org/spottings/552.... Its like an hidden candy :-). Thanks for sharing. Lets see where you've hidden the rest :-)