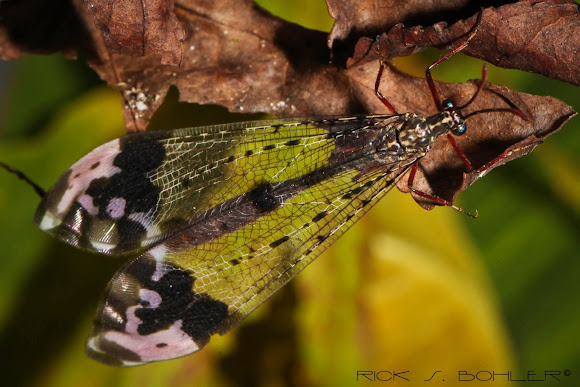 One of the most striking antlions in Florida is Glenurus gratus . The richly dark-marked wings are distinctive in Florida. While most antlion larvae are found in the soil, the unusual, two-toothed mandibled larva. gratus lives in tree holes. Adults can be seen flying in forested areas during the summer months and sometimes are attracted to lights. This species is found throughout peninsular Florida.

Antlions are common, conspicuous insects in Florida. Florida has the richest antlion fauna in the eastern United States with 22 species in nine genera. Four species are found only in the Keys. In the United States, this species is known in Florida, Indiana, Kentucky, Mississippi, Missouri, New Jersey, Ohio and Tennessee.

aka "demons of the dust", children in the southern United States coined the term "doodlebugs" to describe their antics. Although most people associate them with the funnel-shaped pitfall traps, most of the genera have other habits often reflected by their movements which can be very fast across the surface of the sand; slow, creeping movements or fast backward movements under the sand

Thank you Setphanie :) This was really fun to shoot.