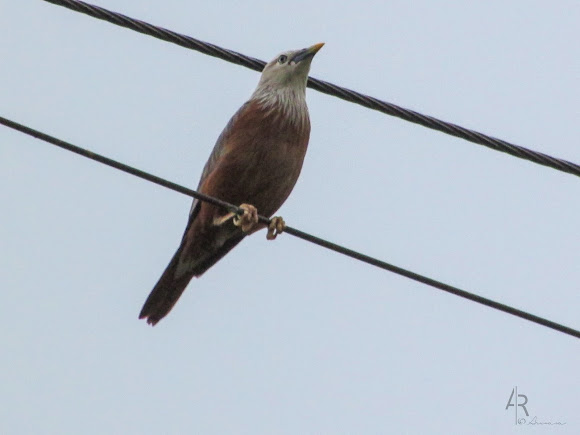 ♦ The chestnut-tailed starling or grey-headed myna (Sturnia malabarica) is a member of the starling family. It is a resident or partially migratory species found in wooded habitats in India and Southeast Asia. The species name is after the distribution of a former subspecies in the Malabar region. While the chestnut-tailed starling is a winter visitor to peninsular India, the closely related resident breeding population with a white head is now treated as a full species, the Malabar starling (Sturnia blythii).--------------------♦ The adults have a total length of approximately 20 cm (7.9 in). They have grey upper parts and blackish remiges, but the colour of the remaining plumage depends on the subspecies. In the nominate subspecies and blythii, the underparts (incl. undertail) are rufous, but in nemoricola the underparts are whitish tinged rufous, especially on the flanks and crissum (the undertail coverts surrounding the cloaca). The nominate and nemoricola have a light grey head with whitish streaking (especially on crown and collar region). Both subspecies have white irides and a yellow bill with a pale blue base. The sexes are similar, but juveniles have whitish underparts and just chestnut tips to the tail feathers.--------------♦ It is typically found in open woodland and cultivation. It builds a nest in hole. The normal clutch is 3-5eggs.--------------Like most starlings, it is fairly omnivorous, eating fruit, nectar and insects. They fly in tight flocks and often rapidly change directions with great synchrony.

♦ Sukanya Mam (@SukanyaDatta) helped me to identify the spotting....