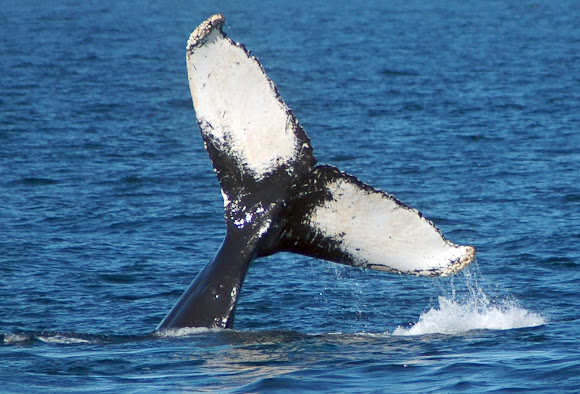 He is listed as FLYER hwc#0183. In the Allied Whale catalog http://www.coa.edu/html/nahc.htm They hold the main catalog for North Atlantic whales and have identified over 6,000 whales! He is thought to be a male since he has not been seen with a calf and he is an "old timer" first seen in 1979. I saw him off Mt. Desert Rock on the

It is indeed a wonderful place.

Ah, the beauties of Maine never fail to amaze me!

1975... went to the first Marine Mammal conference in Bloomington Indiana and they gave an amazing presentation... I think it was one of their first years. (40 sounds right!)

Indeed it is! I think they are in their 40th year.

Great behavior sighting! Is that near where Roger Payne (and Katy) did his/their research?

Sure have! We have a little home Puerto Piramides on the Peninsula. There is a large population there. I have spent about 4 months there during the height of the season over the past ten years. 3 years ago there was an amazing behavior spotted. a group of orcas were trying to kill a newborn calf. over twenty right whales got together to protect the calf and "fight" the orcas. the orcas realized they were outnumbered and moved on after about an hour.

Thanks!! Yes we do have a very endangered population of Right whales (their name is pretty grim... they were the right whale to catch since the floated when harpooned). There are between 200-300 along the Northern Atlantic coast. Yes it is an amazing whale haven down there!! Have you spent time watching them?

beautiful shot Gale. do you guys get any northern wright whales up there? I see you only have humpbacks. I have seen the southern wright whales on numerous occasions in the Golfo Nuevo, peninsula valdes, argentina. That place would be your nirvana!!!!

CNN interview about the importance of recognizing and studying individual whales.
http://www.cnn.com/2011/10/22/tech/innov...