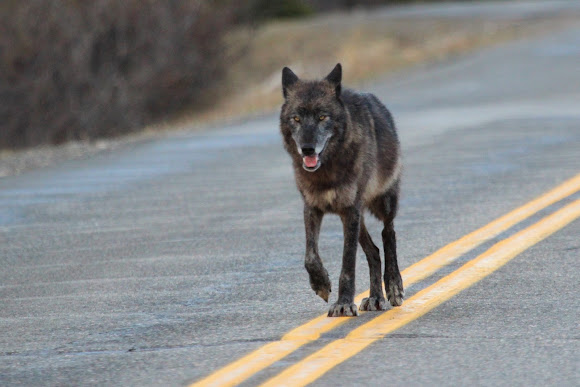 Gray wolves range in color from grizzled gray or black to all-white. Their eyes can be brown, yellow (like this girl), or even blue. A large canine that is the ancestor of domestic dogs and most closely resembles German shepherds or malamutes.

We were driving out of Denali National Park after hiking the Savage river at 10:00 pm. This large female wolf was trotting down the center of the park road. We stopped the car and I was able to open my passenger door to get these shots as she trotted straight to me. As she got much closer, I got back inside and took the last few shots from my open window. She passed within two feet of me. This was my second separate wolf siting that day and one I will never forget (this is my favorite animal in the entire world). Park Rangers have been regularly seeing this female for a couple weeks and said that she has been ranging solo more and more often from the largest pack in the park. They believe that this season she will join with a lone male and become the alpha female of a new pack.

Hey! Thank you all for the SOTD! Absolutely the highlight encounter of my vacation.

Congratulations Musicwolf, this great encounter has earned you a Spotting of the Day!

Great series Musicwolf,awesome,congrats and thanks for sharing

Great spotting and great story Musicwolf. Thank you for sharing this experience with us.