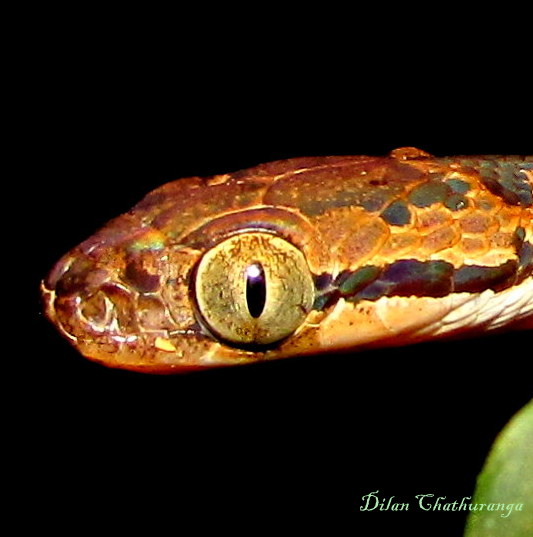 Sri Lanka cat snake can be found in Sri Lanka and throughout the mountain ranges along the Western side of India, the Western Ghats. It is a member of the Colubridae family & It is considered as a mildly venomous and bites rarely cause any issues other than some local swelling. The species has a fairly aggressive disposition and is known to strike out and bite when in danger or feels threatened. Typically, a Sri Lanka cat snake measures approximately 4 feet long. You can expect them to be grey or brown in color and they often have blackish spots or bands. The lower parts of the snake can have a yellow tint dotted with brown spots. A dark brown line runs from eye to mouth creating a distinct characteristic across its cheek. Its name is derived from its large eyes with vertical pupils, resembling those of a cat. The Sri Lanka cat snake is nocturnal; it is rarely seen during the day. It inhabits trees, classifying the species arboreal. The snake is also oviparous; it produces young by way of eggs that are hatched. It is common for the adult female to produce between 5 and 15 eggs. The Sri Lanka cat snake feeds on geckos, skinks, agamids, birds and mice. Known to vibrate its tail upon disturbance, the snake rises up and curves in and out just before it strikes and bites its prey.( http://www.redorbit.com/education/refere...)

A small discription was added just now!!!It will give you a general idea about this snakes!!!