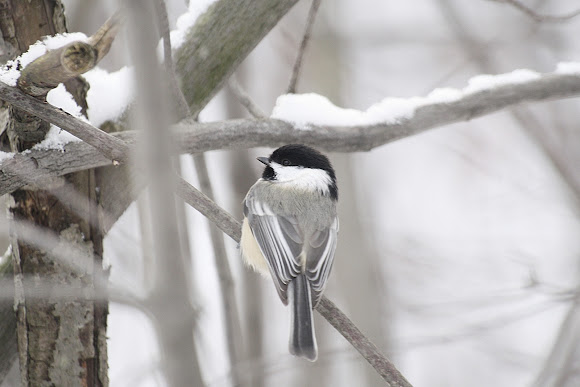 The Black-capped Chickadee has a black cap and bib with white sides to the face. Its underparts are white with rusty brown on the flanks. Its back is gray and the tail is normally slate-gray. This bird has a short dark bill (8.0-9.5 mm), short rounded wings (63.5-67.5 mm) and a long tail (58–63 mm). Total body length is 12–15 cm (4.7–5.9 in), wingspan is 16–21 cm (6.3–8.3 in) and body mass is 9–14 g (0.32–0.49 oz).[3] Sexes look alike, but males are slightly larger and longer than females. Although range can generally be used to separate them, the Black-capped Chickadee is very similar in appearance to the Carolina Chickadee. The Black-capped is larger on average but this cannot be used reliably for identification. The most obvious difference between the two is in the wing feathers. In the Black-capped Chickadee, the wing feathers have white edges that are larger and more conspicuous than those of the Carolina Chickadee. Overall, the Carolina appears slightly paler colored whereas the flanks of the Black-capped can appear to have a trace of off-yellow or rusty coloration. Also, the Black-capped generally has a more "ragged" looking black bib, whereas the bib of the Carolina has a more smooth-edged look. These subtle features are often even more vague in populations around where the the Black-capped and Carolina overlap in range (possibly the result of hybrids) and the two cannot always be distinguished to species. The two species were formerly thought to be easily distinguished by call, but they often learn each other's vocalizations where their ranges overlap (their point of overlap is a narrow band that runs along the east-central United States, with the Black-capped Chickadee to the north). A bird located near the zone of overlap that sings both songs, or sings "odd-sounding" songs, cannot be positively identified solely by voice in the field.

The black-capped chickadee is found from coast to coast, from the northern half of the United States in the south, to James Bay, the southern edge of the Northwest Territories and the Yukon, and the southern half of Alaska in the north. In winter it may wander outside of this range, both to the north and south. Its preferred habitat is deciduous woods or mixed (deciduous/coniferous) woods. It is also found in open woods, parks, and suburban areas. Habitat segregation is the principal factor that separates the Black-capped Chickadee from both the Boreal Chickadee in the north and the Chestnut-backed Chickadee in the Pacific northwest (these two species prefer strictly coniferous forests). Altitude also separates the Black-capped Chickadee from the (higher) Mountain Chickadee in the western mountains and the (lower) Carolina Chickadee in the Great Smokey Mountains.

Thank you Isabela for the name :)

Thank you! I have new pictures of this kind. I'll add them.

Super ! www.oiseaux.net this site is very interesting ! Thank you Isabela :)

Hi Luc, here you can see a list with the birds you can see in Canada.
http://www.oiseaux.net/oiseaux/canada.ht...