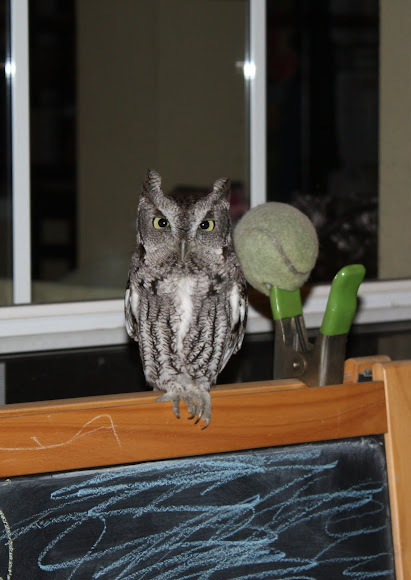 Adults range from 16 to 25 cm (6.3-10 in) in length and weigh 121-244 grams (4.3-8.6 oz).[3] They have either rusty or dark gray intricately patterned plumage with streaking on the underparts. Mid-sized by screech-owl standards, these birds are stocky, short-tailed and broad-winged. They have a large round head with prominent ear tufts, yellow eyes and a yellowish bill. Rusty birds are more common in the southern parts of the range; pairings of the two color variants do occur. A pale gray variation also exists in western Canada and the north-central United States. The color variations are referred to as "red-phase" and "gray-phase" by bird watchers and ornithologists.

Eastern Screech Owls inhabit open mixed woodlands, deciduous forests, parklands, wooded suburban areas, riparian woods along streams and wetlands (especially in drier areas), mature orchards, and woodlands near marshes, meadows, and fields. They try to avoid areas known to have regular activity of larger owls, especially Great Horned Owls. These owls roost mainly in natural cavities in large trees, including cavities open to the sky during dry weather. In suburban and rural areas they may roost behind loose boards on buildings, boxcars, or water tanks. They will also roost in dense foliage of trees, usually on a branch next to the trunk, or in dense scrubby brush.

Im pretty sure this one was eyeing our parakeets through the window!

That is very cool!!

Wow you're so lucky to have gotten that close!

wow! Right out in the open. Such a cool sound they make.