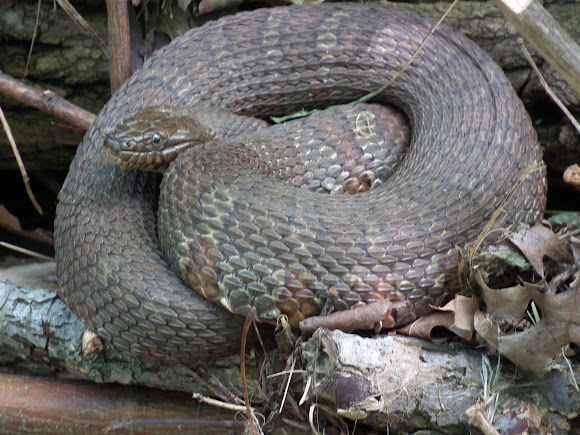 Adult coiled up in branches a couple of feet of the ground near flat branch creek. Coloring is variable - tan, brown, rust, gray. Notice the heavily keeled scales (each scale has a line / ridge in middle). Herpetologists often use this trait when differentiating snakes.

A rocky beach area of a small to medium sized freshwater creek.

This snake is frequently misidentified as a cottonmouth or 'water mocassin' and needlessly killed. Tennessee Herpetology Society produced this brochure on telling the difference between common water snakes and the venomous cottonmouth: http://www.tnherpsociety.org/Cottonmouth...

I like this story and picture. I have a photo of a couple in a tree, plus a closeup of a head, which took me a while to ID - similar but with a more copper coloured skin. After you wrote about the scales I had to go back to my pics and double check!

Thanks, knowing this , i will leave a few bowls near spots where i see those snakes.
i always stay away from them. i am very scared of snakes.

Yes, snakes can get dehydrated. It is common for pet snakes to drink water from small ceramic bowls placed in their enclosure.

Indian Mythology makes a Snake a very fascinating creature!
We have flying snakes in Baroda which live in almond tree.
In California, when it gets really hot, sometimes tiny snakes slither up the drive way. i feel that they are seeking a cooler place or possibly looking for water.
Do you think that a snake would drink water out of a container? Snakes can get dehydrated ?

You're welcome. I love teaching opportunities like this because there are so many false myths out there about certain animals, especially snakes.

Thanks for enriching Project Noah !!

Yes, water mocassins (the common name is actually cottonmouths) are definitely fierce. I worked with them some at grad school. They don't "jump into boats" though. A lot of different water snakes like to bask in the sun in the branches that hover over the water. When disturbed, they often just drop down into the water. Occasionally they land in a canoe. Its accidental, as they are trying to get into the water.

Water Moccasins are fierce! i heard that they jump into the boat!
This snake has beautiful markings! is the process of shedding skin painful?

Added a few more photos of this spotting, so now there are 5 photos.