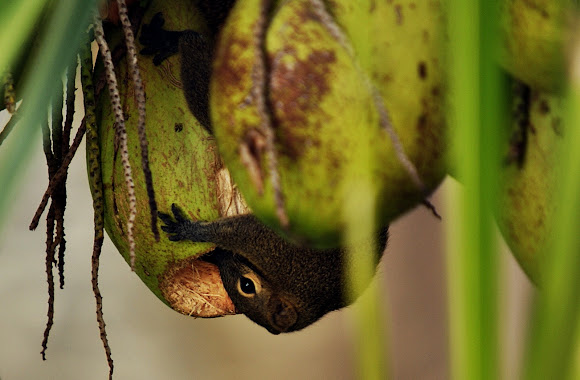 Tree squirrels include over a hundred species that are found on all continents except Antarctica, and are the members of the squirrel family (Sciuridae) most commonly referred to as "squirrels".[1] They do not form a single natural, or monophyletic, group, but instead are related to the various other animals in the squirrel family, including ground squirrels, flying squirrels, marmots, and chipmunks.

The most well-known genus of tree squirrels is Sciurus, which includes the eastern gray squirrel of North America (and which was introduced to Great Britain), the red squirrel of Eurasia, and the North American fox squirrel, among many others. Since many tree squirrel species have readily adapted to human-altered environments (including intensely-cultivated farms and urban cities), and because they are mostly diurnal (active during the daytime), when most people are outdoors to see them, they are perhaps the most familiar members of the rodent family to most humans. Indeed, in some larger cities, they are often the only wild animals (not counting birds) that most people ever see. It is no surprise, then, that tree squirrels and humans have had a very complex and long-lasting relationship.

yeah actually I was just having coffee in my hotel room balcony and I saw the squirrel... luckily it was more interested in the coconut than what I was doing!!!!

Now thanks for you. You got squirrel in very specific position. Very interesting for observation.

Please add in a mission..