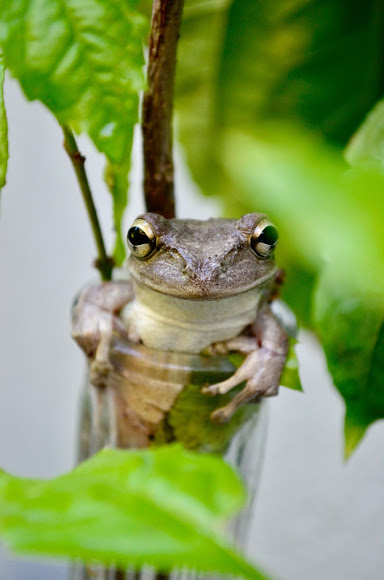 It is the largest tree frog of North America. Its wide diet and ability to thrive amongst humans has made it a highly invasive species with established colonies in northern Florida, the Hawaiian island of Oahu, and throughout the Caribbean Islands. They range in size from 3 to 5.5 in (76 to 140 mm) and vary in color from olive-brown and bronze to gray or grayish-white. A nocturnal, tree-dwelling frog, it is known to eat almost anything that will fit in its mouth and to mate year-round. Cuban tree frogs are commonly available as pets; however, because the animal secretes a toxic mucus from its skin that can cause a burning sensation in the eyes, it is not an ideal pet. Further distribution of the species is believed to have been expanded by the release of these pet animals.

The Cuban tree frog (Osteopilus septentrionalis) is an amphibian native to the Caribbean region of the Western Hemisphere.

This Cuban Tree Frog was hanging out in a vase I use to root plant cuttings.