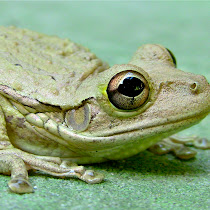 The Cuban Treefrog in Florida

In Southwest Florida it's becoming a problem and their population is out of balance. Document your encounters with Osteopilus septentrionalis making sure to include as many details as possible. Sign in to join mission

Although they predominately occur around human developments, such as urban neighborhoods, Cuban Treefrogs are also able to invade natural areas. Cuban Treefrogs are known predators of Florida's native herp population and appear to be responsible for declines of some native treefrog species and also Anoles.