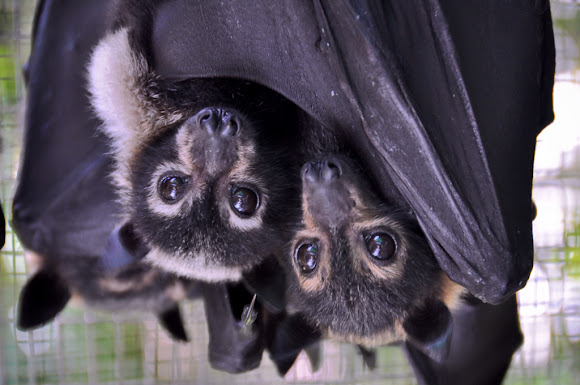 Adult head and body length is up to 25 cm, weight 400g – 900g. A large black flying fox has pale yellow or straw-colored fur around its eyes. The mantle is pale straw colour and extends across the back, neck, and shoulders. Some have pale yellow fur on the face and top of the head. Markings can vary significantly between individuals.

Generally Spectacled Flying-foxes are found in dense rainforests. They prefer to roost in the middle and upper canopy. These individuals were in a colony not far from Atherton.

These two juveniles were photographed at the Tolga Bat Hospital. They were abandoned or orphaned after their mother was affected by paralysis ticks. They are among hundreds saved every year, released back into the wild when they reach the right age / weight. They are a threatened species.

Steve A 7 years ago

Added as the first entry in the Threatened Species Mission

They are both juveniles, one has his wing wrapped around the other

Are these cubs wrapped inside mama's wing..?

These bats are beautiful and threatened! Please support the work of the bat hospital www.tolgabathospital.org

lovely eyes they have.

Wow, that is a great post. Information is great, and picture is very captivating.