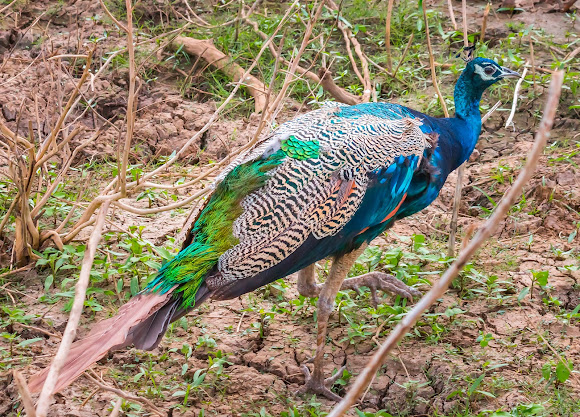 The Indian peafowl (Pavo cristatus), also known as the common peafowl, and blue peafowl, is a peafowl species native to the Indian subcontinent. It has been introduced to many other countries. Indian peafowl display a marked form of sexual dimorphism. The peacock is brightly coloured, with a predominantly blue fan-like crest of spatula-tipped wire-like feathers and is best known for the long train made up of elongated upper-tail covert feathers which bear colourful eyespots. These stiff feathers are raised into a fan and quivered in a display during courtship. Despite the length and size of these covert feathers, peacocks are still capable of flight. Peahens lack the train, have a white face and iridescent green lower neck, and dull brown plumage. The Indian peafowl lives mainly on the ground in open forest or on land under cultivation where they forage for berries, grains but also prey on snakes, lizards, and small rodents. Their loud calls make them easy to detect, and in forest areas often indicate the presence of a predator such as a tiger. They forage on the ground in small groups and usually try to escape on foot through undergrowth and avoid flying, though they fly into tall trees to roost. The function of the peacock's elaborate train has been debated for over a century. In the 19th century, Charles Darwin found it a puzzle, hard to explain through ordinary natural selection. His later explanation, sexual selection, is widely but not universally accepted. In the 20th century, Amotz Zahavi argued that the train was a handicap, and that males were honestly signalling their fitness in proportion to the splendour of their trains. Despite extensive study, opinions remain divided on the mechanisms involved. The bird is celebrated in Hindu and Greek mythology and is the national bird of India. The Indian peafowl is listed as of Least Concern by the International Union for Conservation of Nature (IUCN). Peacocks are a larger sized bird with a length from bill to tail of 100 to 115 cm (39 to 45 in) and to the end of a fully grown train as much as 195 to 225 cm (77 to 89 in) and weigh 4–6 kg (8.8–13.2 lb). The females, or peahens, are smaller at around 95 cm (37 in) in length and weigh 2.75–4 kg (6.1–8.8 lb). Indian peafowl are among the largest and heaviest representatives of the Phasianidae. So far as is known, only the wild turkey grows notably heavier. The green peafowl is slightly lighter in body mass despite the male having a longer train on average than the male of the Indian species. Their size, colour and shape of crest make them unmistakable within their native distribution range. The male is metallic blue on the crown, the feathers of the head being short and curled. The fan-shaped crest on the head is made of feathers with bare black shafts and tipped with bluish-green webbing. A white stripe above the eye and a crescent shaped white patch below the eye are formed by bare white skin. The sides of the head have iridescent greenish blue feathers. The back has scaly bronze-green feathers with black and copper markings. The scapular and the wings are buff and barred in black, the primaries are chestnut and the secondaries are black. The tail is dark brown and the "train" is made up of elongated upper tail coverts (more than 200 feathers, the actual tail has only 20 feathers) and nearly all of these feathers end with an elaborate eye-spot. A few of the outer feathers lack the spot and end in a crescent shaped black tip. The underside is dark glossy green shading into blackish under the tail. The thighs are buff coloured. The male has a spur on the leg above the hind toe. The adult peahen has a rufous-brown head with a crest as in the male but the tips are chestnut edged with green. The upper body is brownish with pale mottling. The primaries, secondaries and tail are dark brown. The lower neck is metallic green and the breast feathers are dark brown glossed with green. The remaining underparts are whitish. Downy young are pale buff with a dark brown mark on the nape that connects with the eyes. Young males look like the females but the wings are chestnut coloured. The most common calls are a loud pia-ow or may-awe. The frequency of calling increases before the Monsoon season and may be delivered in alarm or when disturbed by loud noises. In forests, their calls often indicate the presence of a predators such as the tiger. They also make many other calls such as a rapid series of ka-aan..ka-aan or a rapid kok-kok. They often emit an explosive low-pitched honk! when agitated.