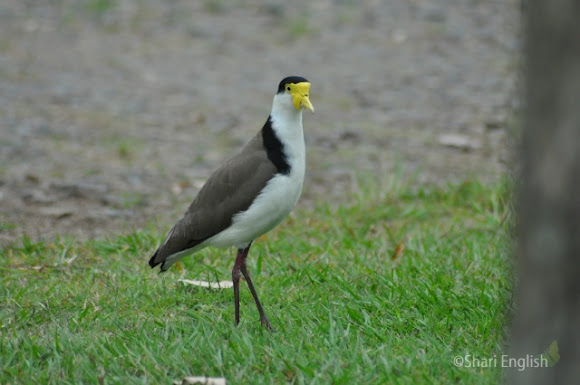 Also commonly called a spur-winged plover, it is a noisy bird with long legs, olive-brown back with white underside and black cap and band around the neck. It also has a distinctive yellow wattle around the base of the beak and eyes. The plover is also known for the spur it bears on the 'wrist' of its wing which it uses to strike at predators.

Found in many areas including tidal flats, wetlands, grasslands and open spaces, including parks gardens and vacant areas, very commonly found along grassy strips next to roads.

This bird and chicks was spotted on the grounds of the Australian Wildlife Hospital at Australia Zoo. I was a volunteer there for a number of years and the plovers would have chicks there every year. They weren't injured wildlife they just liked the grounds because it was fenced off and well protected and maybe they knew there were so many wildlife lovers there! But the mother was very happy to show off her chicks to us all and let them wander on their owns and didn't mind me taking lots of pictures. In the second picture you can see the chick hiding under its mothers wing because a large bird flew over. In this picture you can also clearly see the spur on the wing. Gorgeous little chicks and it was wonderful to watch them grow up there =)

Shari this bird is beautiful!

Best of Luck for exams...

Hey guys, sorry I haven't got any info on here yet, I will update it now =). I was only new to Project Noah when I uploaded most of my photos and didn't put much info in, but I'm slowly getting through them all and updating the details as well as adding more photos from the spotting. I only have one more exam for uni for the year (yay!) and then I will hopefully finish them all off =)

Shari what is Habitat wild or urban..?