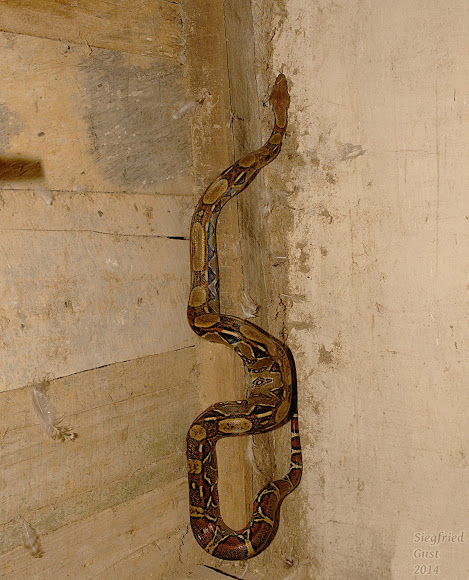 Found this boa (Boa constrictor) inside the chicken coop. I got lucky, it had already made it's way up to the roosting poles. I'm pretty sure a few minutes later and I would have had one or two chickens less. When captured it wrapped it's body around my arm and squeezed tight enough to cut off blood flow. After I removed it, I released it about 2 miles away.

A bite from a boa definitely wouldn't be fun, especially one this size!

SG in CR 6 years ago

Neil, Ashley, thanks for taking a look. The snake showing up in the chicken coop worked out for everyone. The snake got taken to a spot out of the farm (most of our employees will kill any snake on sight, regardless of my telling them not to). The chickens probably didn't understand what all the fuss was about. And I got to get some neat pictures and handle the snake. As far as getting my hands on it, I pinned it to floor with a stick first, so I could get a grip right behind the head. Otherwise it would have left me bloody. The first few minutes it was pretty pissed.

Well done, Sigg. Lucky for the chickens too, and probably the boa as well. I'm sure many would have just killed it. Thanks for sharing this wonderful spotting.

Awesome you could get your hands on him, such a pretty snake! I just got back from Mexico and saw two of these and neither I could get to so I could hold them :/