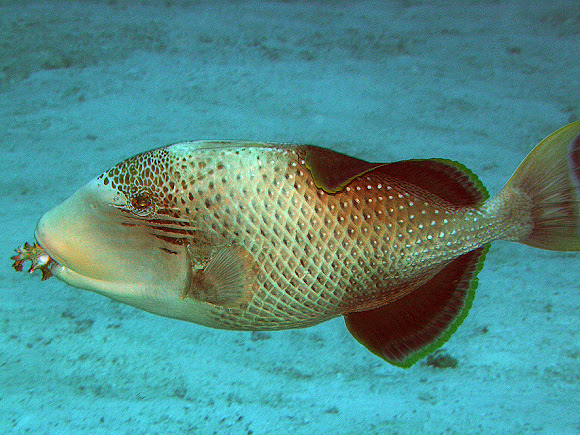 Usually compressed body. Pelvic fins fused to one spine. First dorsal spine with locking mechanism . With 12 principal rays in caudal fin. 18 vertebrae . Upper jaw non-protrusible. Upper jaw usually with four teeth in outer and three in the inner series on each premaxillary . Capable of rotating eyeballs independently. Triggerfish normally swim by undulating their second dorsal and anal fins, but will use their tail for rapid bursts. Most triggerfishes are solitary diurnal carnivores , feeding on a wide variety of invertebrates including hard-shelled mollusks and echinoderms ; some also feed on algae or zooplankton . They lay demersal eggs in a nest which is aggressively guarded by the female, less often by the male. Popular and hardy in aquaria , but often aggressive.The family Balistidae belongs to the Class Actinopterygii (ray-finned fishes ) and the Order Tetraodontiformes. It contains 11 genera and 40 species. It may be found in Marine environments and is primarily Marine. Many members of this family are used in the aquarium trade. Reproductively, most members of this family are guarders . The main mode of swimming of adult fish in this family is balistiform. Compared with other fish, the activity level of this family tends to be normal.

Atlantic, Indian and Pacific Oceans. Coral reefs. This specimen is precisely protecting a piece of coral he was eating at the floor when I first saw him.

Really?....wow! very interesting knowledge there Marta Thank you. Guys I am learning Spanish, hope in few months I will be able to understand! :-))

And as I was saying to Noe and Pili triggerfish in general are potentially dangerous..if you approach one that is close to what he/she considers his/her house it will chase you away and try to bite you. You better escape by removing yourself from the area without moving vertically (in the latter case he can chase you up to the surface).

This is a beauty as well!