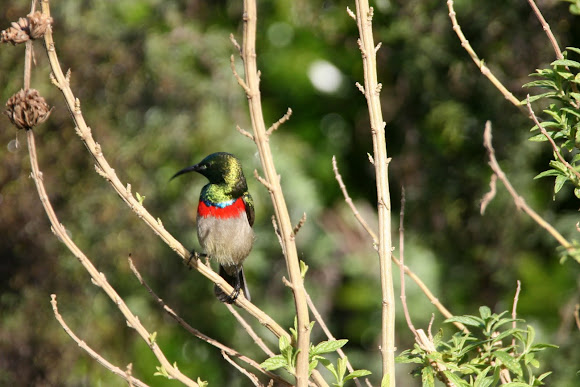 The Southern Double-collared Sunbird is 12 cm long. The adult male has a glossy, metallic green head, throat upper breast and back. It has a brilliant red band across the chest, separated from the green breast by a narrow metallic blue band. The rest of the underparts are whitish. When displaying, yellow feather tufts can be seen on the shoulders. As with other sunbirds the bill is long and decurved. The bill, legs and feet are black. The eye is dark brown. The male can be distinguished from the similar Greater Double-collared Sunbird by its smaller size, narrower red chest band and shorter bill. The female Southern Double-collared Sunbird has brown upperparts and yellowish-grey underparts. The juvenile resembles the female. The female is greyer below than the female Orange-breasted Sunbird, and darker below than the female Dusky Sunbird.

This sunbird is common in gardens, fynbos, forests and coastal scrub. The Southern Double-collared Sunbird breeds from April to December, depending on region. The closed oval nest is constructed from grass, lichen and other plant material, bound together with spider webs. It has a side entrance which sometimes has a porch, and is lined with wool, plant down and feathers.