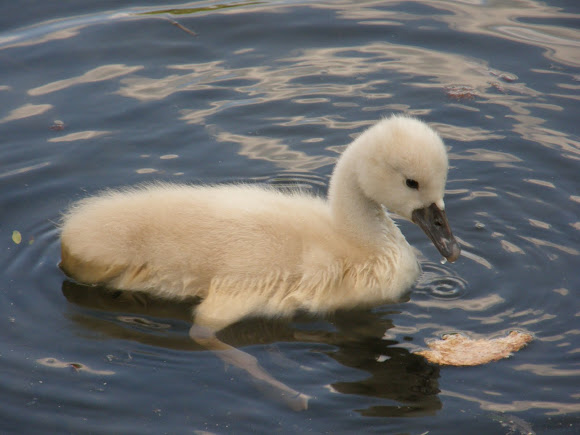 The Mute Swan (Cygnus olor) is a species of swan, and thus a member of the duck, goose and swan family Anatidae. The name 'mute' derives from it being less vocal than other swan species. Measuring 125 to 170 centimetres in length, this large swan is wholly white in plumage with an orange bill bordered with black. It is recognisable by its pronounced knob atop the bill.Young birds, called cygnets, are not the bright white of mature adults, and their bill is dull greyish-black, not orange, for the first year. The down may range from pure white to grey to buff, with grey/buff the most common. The white cygnets (first picture) have a leucistic gene. All Mute Swans are white at maturity, though the feathers (particularly on the head and neck) are often stained orange-brown by iron and tannins in the water.

It is native to much of Europe and Asia, and (as a rare winter visitor) the far north of Africa. It is also an introduced species in North America, Australasia and southern Africa.

oops..i am in the wrong spot..

Susan, very beautiful set of pictures! I love the blue ring around the eye of the dove.