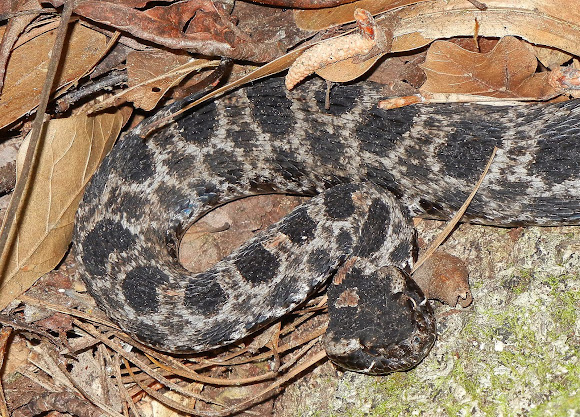 My first and only encounter with a pygmy rattler. These snakes range from only 30-60mm (12-24in), but they make up for their size with attitude. This was by far the most upset a rattlesnake has ever been with me!

This individual was spotted in Timucuan Ecological and Historical Preserve in an mixed pine-hardwood forest with abundant saw palmetto undergrowth. It inhabits generally any kind of habitat within its range, as long as its in close proximity to water. These little guys are supposedly really good swimmers!

These snakes have so few small rattles that it sounds similar to a buzzing insect. At least this is what I've been told. I honestly was maybe 2 meters away while it was rattling its tail like crazy and I never heard it. Their small size and quite rattle makes them much more elusive than other rattle snakes in the area, which is definitely a good thing for these awesome little snakes.

I don't mind at all, thanks!

I was just reading about this snake. It really does stay fairly small. Judging by where you saw it, I think its the barbouri subspecies. I hope you don't mind, I've added a reference link to this subspecies. You are right and it is very sad that many venomous snakes are killed out of fear.

dandoucette, I didn't even hear its tiny rattle a couple of feet away, but it was surely rattling! Heather, I consider this snake a lovely find because in these southeastern states (and surely elsewhere) so many venomous snakes get killed by people out of fear that I hardly ever see rattlesnakes of any kind anymore.

I know we do more damage to snakes, in form of habitat destruction and crowding, etc...but just I can't wrap my head around calling a snake a "lovely find" if I walk up on it.
I immediately return to my barefoot playing child that I was, running around the back yard up to the creeks. It would be like a giant game of Red-light/green light when anyone spotted a snake and yelled, "Snake". All in earshot would freeze as to not step on it (I guess). At which point we would leave one kid to keep an eye on it from a distance, usually me for some reason, and the other littler kids would run to get the adult and snake ID book, we could match the pictures, but the adult did the "quick" reading and any "hoe work." The adult would relocate the snake on the end of a hoe or hard rake. Then we'd get sent to the front yard to play. The only thing we had to watch out for was "Car." Oh childhood.

Sounds like a great job! That explains your spottings. Did you hear this snake before you saw it?

Well, I work for the National Park Service, setting up plots in National Parks to search for reptiles and amphibians for inventory and monitoring... this lovely find just happened to be stepped upon during set-up of the plot. A very beautiful snake, I was stoked about this one :)

Awesome spotting! Any story behind finding it?