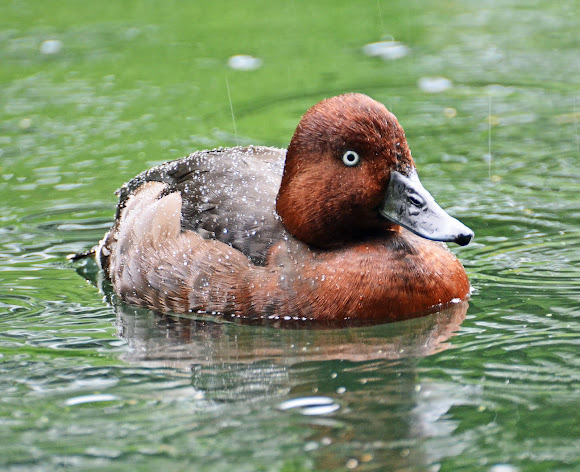 The striking ferruginous duck is classified as near threatened by the IUCN (International Union for Conservation of Nature). It was surprisingly spotted here in an open pond in Switzerland, outside its normal distribution range, as these ducks breed in southern and eastern Europe and southern and western Asia. The adult male spotted here is a rich chestnut colour with a darker back,a white eye and a pure white tail.

Large pond. Usual habitat is marshes and lakes with a metre or more water depth. This duck must be a vagrant bird or an escapee as its summer distribution is Central Asia to Greece and the south-east of Spain and North Africa, and its winter distribution is up to India, northern Indochina, south of the Sahara. It was spotted here in the company of tufted ducks, with which it is often seen in its normal distribution range.

The Central Swiss Bird Observatory reports no sighting of this bird in Switzerland: http://www.vogelwarte.ch/ I have previously spotted this duck (I'm assuming it's the same individual but I can't be sure) at the same pond same time last year: http://www.projectnoah.org/spottings/618... It couldn't be identified at the time as I could not see its face, flanks or tail.

Thanks for your comment Susan! Indeed the eye is striking, it's what allowed me to find this duck in my bird book even though it's out of range.

looks like it is looking right into your eyes!

Thank you Shea! It is quite a striking bird.