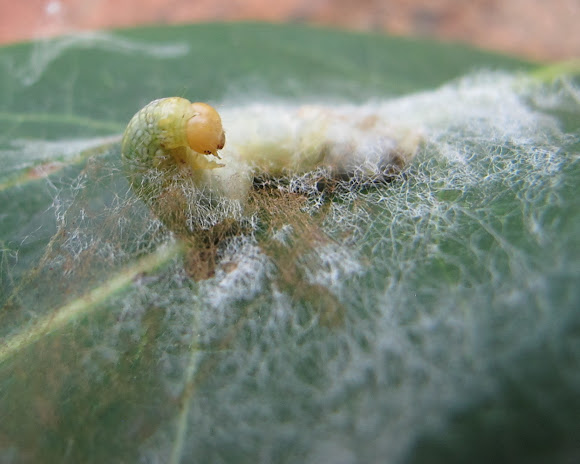 Green/yellow/brown cutworm with vertical stripes. Created a web around itself in preparation for creating chrysalis. It came out to investigate the movement I caused while taking photo's. The moth can be seen at spotting: http://www.projectnoah.org/spottings/692.... "The omnivorous looper (family Geometridae), also called looper or avocado looper, feeds on several dozen plant species. Omnivorous looper occurs in most avocado groves, generally in low numbers, unless natural enemies are disrupted by application of broad-spectrum insecticides. Adults are mostly tan to orangish on top, with a narrow black band across the middle of the wings. They are white on the underside and have a wingspan of about 1.75 to 2 inches. Females live 2 to 3 weeks, laying eggs in clusters of 3 to 80 on the underside of leaves. Each barrel-shaped egg has a ring of tiny projections around one end. Eggs initially are pale green, then turn shiny reddish to brown. Eggs hatch about 8 or 9 days after oviposition, leaving transparent shells. Young larvae are pale yellow and about 0.06 inch long. Mature larvae are 2 to 2.5 inches long and mostly yellow to pale green or pink, with a gold-colored head. Older larvae have variable dark brown, black, green, or orangish lines along their sides. In addition to three pairs of true legs behind the head, avocado looper has two pairs of appendages (prolegs) near its rear on abdominal segments 6 and 10. Larvae travel in a characteristic looping manner, where they extend their body forward, then draw their rear forward to meet their forelegs. This arches their body up into a loop. When disturbed, omnivorous loopers often drop and hang from leaves on a silken thread. Larvae feed about 6 weeks, then pupate within rolled or webbed leaves. Pupae are 1 to 1.25 inches long and white when first formed. The case darkens as a moth with brownish wings develops and can be seen through the pupal case. Pupation lasts 1 to 4 weeks. Populations increase with increasing temperatures in spring. Omnivorous looper typically has four (and perhaps five) generations per year at warmer growing areas. From inland Ventura to San Diego Counties, most adults fly and oviposit during January through March, May through June, August through September, and October through November. Three generations a year are typical in coastal Santa Barbara County, where moths typically emerge and lay eggs during March through April, June through July, and August through September. Depending on temperature, egg to adult development takes 2 to 5 months." - UC IPM Online

"Leaf damage is especially evident on terminal shoots. Very young larvae feed only on the leaf surface, leaving a characteristic brown membrane. Older larvae chew all the way through the leaf, often leaving only the midrib and large veins. Full-grown larvae can consume an entire leaf in 1 day. Healthy avocado trees tolerate considerable leaf damage without severe effects on growth or yield. Extensive feeding can result in sunburn and may reduce yield the following year. Economic damage occurs primarily when caterpillars damage fruit. Both young and old larvae can chew fruit. If young fruit is fed on, it sometimes becomes misshapen. Chewing typically scars the fruit surface, which may cause fruit to be culled or downgraded." - UC IPM Online

Does anyone recognize this caterpillar? We didn't hold onto it to wait for it to build a cocoon then emerge.