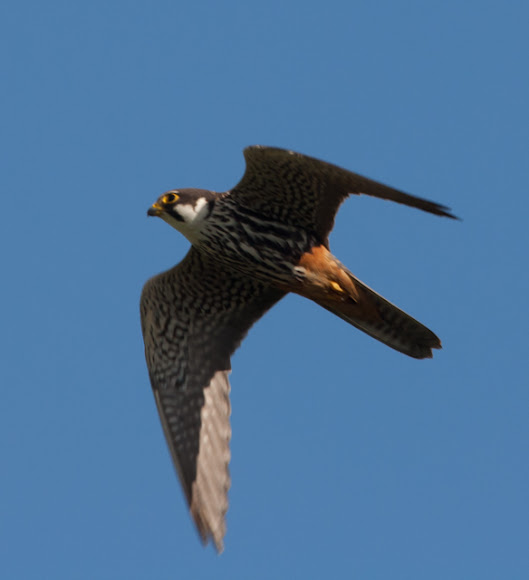 About the size of a kestrel with long pointed wings, reminiscent of a giant swift. It has a dashing flight and will chase large insects and small birds like swallows and martins. Prey is often caught in its talons and transferred to its beak in flight. Can accelerate rapidly in flight and is capable of high-speed aerial manoeuvres.

Oh right, I haven't been there for a while, I love it there. Short-eared Owls, Bittern and Smew are about there at the moment.

I've been up Abberton 4 times in the last few weeks, its always sunny in the morning then when i get there pouring with rain =(

Any large body of water will usually have a Hobby hunting insects during the summer. Abberton Reservoir, Essex Wildlife Trust reserve, is good for Hobby's you can usually spot more than one during the summer. At think there was at least 6 reported one day during September

you've got a good eye, where abouts in essex do you go to see these?? im always looking for new haunts!

Nice picture and a great informative write up.

Hi Nice pic you should add this to the new british bird of prey mission http://www.projectnoah.org/missions/8533... i used it for the mission shot, hope thats ok, much better than mine =)