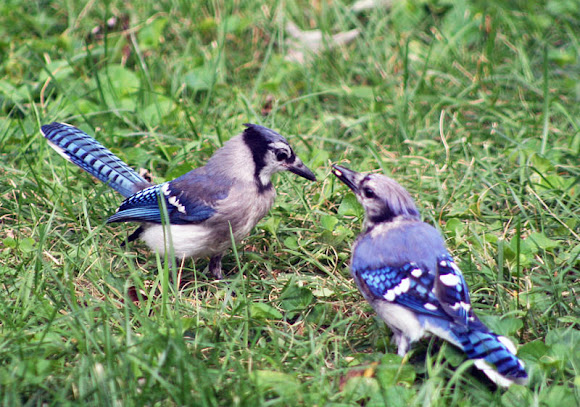 The Blue Jay is resident through most of eastern and central United States and southern Canada, although western populations may be migratory. It breeds in both deciduous and coniferous forests, and is common near residential areas. It is predominately blue with a white breast and underparts, and a blue crest. It has a black, U-shaped collar around its neck and a black border behind the crest. Sexes are similar in size and plumage, and plumage does not vary throughout the year. Four subspecies of the Blue Jay are recognized. The Blue Jay mainly feeds on nuts and seeds such as acorns, soft fruits, arthropods, and occasionally small vertebrates. It typically gleans food from trees, shrubs, and the ground, though it sometimes hawks insects from the air. It builds an open cup nest in the branches of a tree, which both sexes participate in constructing.

Got some good shots there!