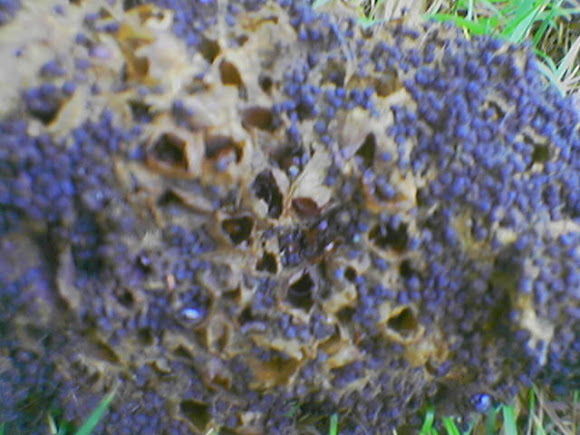 The fruiting bodies are numerous grape-like clusters that form tightly packed groups. The capsules are spherical, oval but mostly ovoid or pear-shaped. They have a blue to blue-gray color. In rare cases, they are deep dark blue stained trough gipsum-short. Sometimes the surface is metallic iridescent. The fruiting bodies reach a diameter of 0.4 to 1.5 millimeters and a length of one to two millimeters. You are on thin filamentous and ribbon-like stems, where they usually hang. In rare cases, the reproductive organs are sessile. The envelope (peridium) consists of a thin skin. The surface may be wrinkled by lime. The peridium breaks in the top panel irregularly, but often remains almost intact. After disappearance of the spores, they appear bright white. By transmitted light can be detected meandering lines, which may form an incomplete network. The stems are pale yellow to brown in color and quite fragile. They are 0.5 to 3 mm thick and 5 mm long, rarely longer. They are often bundled together and remember dry grass. The stems have cross-connections and share the fiber-like. At the tips are sometimes more fruiting bodies. The common membranous base (Hypothallus) is ocher to brown and goes into the stems. Often it is hardly noticeable. The spores appear black in mass. The plasmodium is yellow to orange yellow. ( http://www.hiddenforest.co.nz/slime/inde... ) [fruitingbodies - Sporangia]

The fruiting bodies are formed from September to April, except during frost. Sometimes they can also be found in the summer. The slime fungus colonizes the bark or dead wood of deciduous and coniferous trees. He often can be found also on the layer Striegel fungus (Stereum hirsutum), sometimes also on the Gelbstieligen Muschelseitling (Sarcomyxa serotina) or the large-pore Datronie (Datronia mollis). Socializations were Badhamia foliicola, Physarum nutans and Trichia contorta (var. contorta) were observed. Badhamia utricularis is distributed worldwide and in Central Europe quite frequently encountered