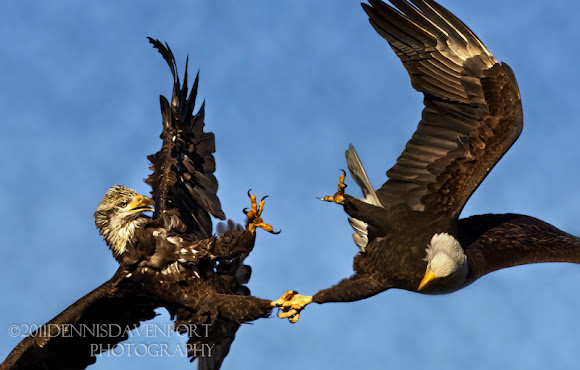 This magnificent raptor starts out mainly brown as a fledgling but gets its white head and tail in about 4 years. Male and female are similar in colors but the female is usually larger. In the photo, the bird on the left is probably in its third year.

These birds can be seen almost anywhere in the U.S. and Canada. They build the largest stick nests of all raptors; the nest can weigh up to 2 tons.

I was photographing the younger bird (left side of pic) perched on a snag and facing toward the left of the picture. The perch is probably about 80 feet high. As I had my eye to the viewfinder, taking shots, the perched bird suddenly looked agitated or interested in something it could see, but I couldn't, due to tree foliage to my left. It even spread its wings right there on the perch when suddenly the mature eagle flies in from the left, which I couldn't see until it got into my frame. It happened so fast that I really don't know whether the younger bird was knocked off the perch or, it voluntarily took flight. But by the time this frame was shot (one of a bunch of burst frames), the mature bird ended up on the right clutching talons with the immature bird. I don't believe the birds are fighting--instead, this is a probably a version of the sky dances Bald Eagles do quite often. http://dennisdavenportphotography.com/ This image won 3rd place in the Ridgefield NWR 2011 Photo Contest and 1st place in the Adoramapix.com Your Best Shot of 2011 Photo Contest.

I agree with Ashish! I have seen this before where a mature eagle will knock a juvi off the perch that they would like to perch on! Such a beautiful image!

Thank you all for the nice comments!

magnificent scene! all my appreciation, Dennis!

The story and its telling are as wonderful as the photo itself!! I wonder if this is a previous year nestling of the mature eagle? After this years chicks have fledged or if there is a chickless year, the adults seem tolerant of young birds which I suspect are their own.

Congratulations on an amazing capture!